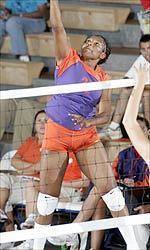 Charlottesville, VA – The 25th annual ACC volleyball tournament got off to a thrilling start after Clemson defeated Virginia Tech in five games (30-19, 36-34, 28-30, 28-30, 15-8) in Memorial Gymnasium on the University of Virginia campus. With the win, the Tigers move on to the second round to take on the tournament’s top seed, Georgia Tech. For the Hokies, the season concludes with a 13-16 overall record.

Also contributing for Clemson was Leslie Mansfield, who led the team with four service aces. The Tigers had 11 over the course of the match. She also had 15 digs. Setters Stephanie Haskell and Courtney Lawrence combined for 72 assists.

Clemson held a slight lead at 13-10 in game one, but went on to win 10 of the next 12 poitns to get off to a good start in the match. In game two, Clemson won the final three points of the back-and-forth action. Ross had eight kills in the second game.

In the third, Virginia Tech rallied to keep the match alive. The Hokies fought back again in game four, this time from a 22-17 deficit. In the fifth, Clemson held a 9-6 lead before scoring six of the last eight points in the match.

The Tigers face the Yellow Jackets in the first match of the second round on Friday. First serve is scheduled for 11:00 AM.