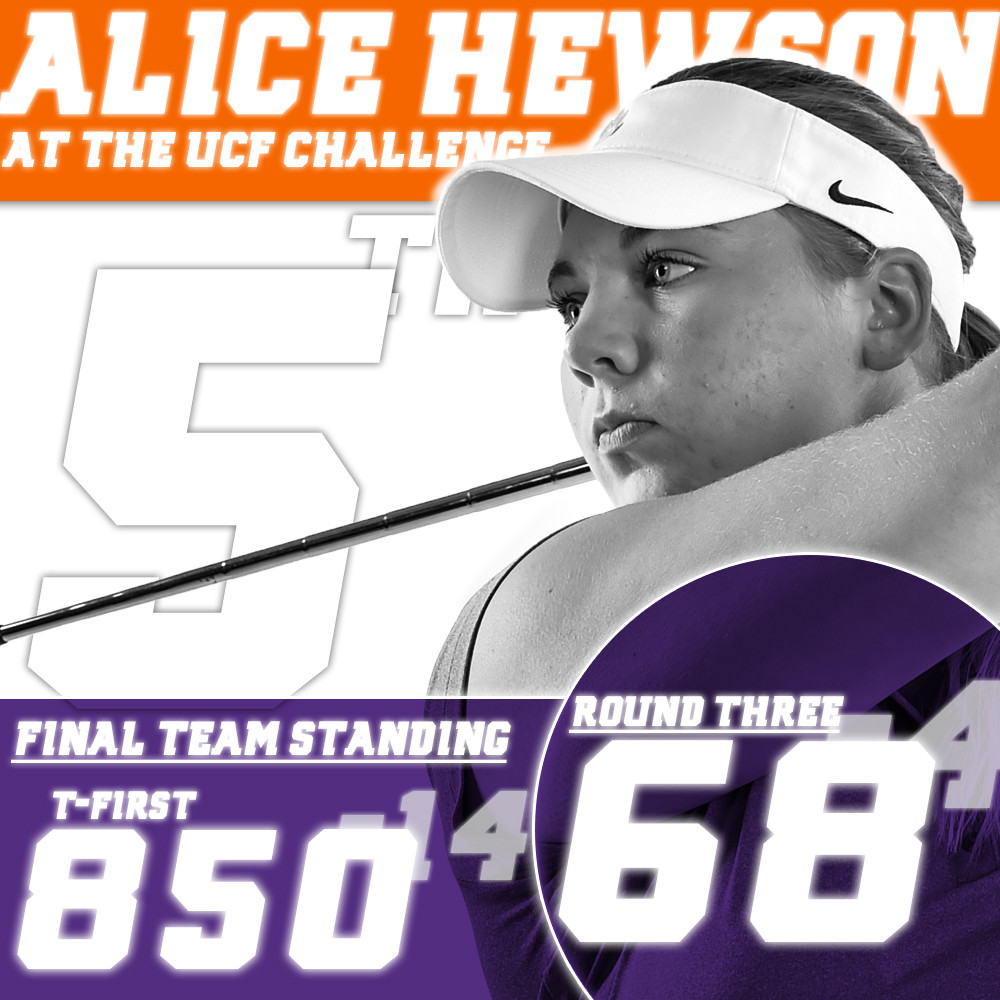 Clemson, S.C.—Alice Hewson made birdie on her final hole of the day to complete a dramatic comeback allowing Clemson to tie 14th ranked Miami (FL) for the championship of the UCF Challenge at Eagle Creek Golf Club in Orlando, Fla. It marks the first tournament championship in the four-year history of the Clemson women’s golf program.

While the event is officially a co-championship, Clemson was awarded the first place trophy by virtue of the fact that Clemson’s fifth best player on Tuesday, Ana Paula Valdes, had a lower score (75) than Miami’s fifth best player.

Clemson shot a program best seven-under-par 281 on Tuesday to finish at 14-under-par 850, tied for top honors with Miami (FL).   Clemson trailed by five shots with just five holes left. Texas, ranked 17th in the nation, finished third with a 10-under-par score of 854, the same as host school UCF and Mississippi State. Kent State, the highest ranked team in the tournament with a No. 10 rating, finished sixth with an 861 score.

Clemson finished higher than eight top 50 teams in the field of 17 squads from around the nation who came to Orlando to play the par 72 course. “This was a big win for the program, the first victory in our history,” said Head Coach Kelley Hester. “I am so proud of this team and the way they have worked.

“We putted the ball well all week, especially today and we stayed patient. We had a couple of holes with big scores, but everyone held their composure.”

Hewson led the way on Tuesday and for the tournament with her second round of four-under-par 68. She finished fifth in the field of 96 golfers with a 209 score. She had five birdies on Tuesday, including her final hole when she hit her approach to within three feet.   That putt combined with a bogey by a Miami (FL) player allowed the two teams to tie for the title.

Sydney Legacy had a final round 69 and finished the strongest with three birdies on her final five holes. The native of Lexington, S.C. had five birdies and two bogeys on the day in recording the low score of her Clemson career. She finished 28th with a one over par 217 total for the 54 holes.

Kennedy Swann was a third Tiger under par with a final round 70. The freshman, who just entered Clemson in early January, finished 12th for the 54 holes with a score of 212 after rounds of 72-70-70.   Her best hole of the day was the par five 16th when she chipped in for the first eagle of her career.

Jessica Hoang was Clemson’s fourth counting score on Tuesday with a two-over-par 74.   She also had a clutch birdie coming in as she made a birdie four on the par five fourth hole, her next to last hole of the day.

Ana Paula Valdes had a 75 on Tuesday and her score did not count towards the team score, but she still finished 25th in the tournament with an even par score of 216.