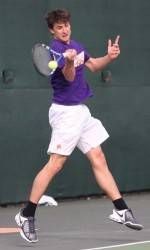 Clemson is off to a 10-0 start this season. The 10 consecutive victories are tied for the third best start in school history. The Tigers are ranked 56th in the latest ITA National poll.

UNC-Greensboro has a 6-1 record overall this season. The Spartans’ Orcun Seyrek is 14-4 overall on the year in singles matches and 5-1 in the spring.

This will be the sixth meeting between Clemson and UNC-Greensboro in men’s tennis. Clemson leads the overall series 5-0.