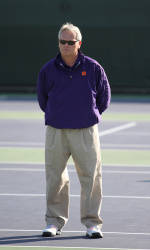 Clemson has a 4-6 record overall, and a 1-0 mark in the ACC. Miami has a 6-2 record overall and a 0-1 slate in conference play. The Hurricanes are ranked 59th according to the latest ITA poll. The Tigers are coming off a 4-3 victory over Georgia Tech in Atlanta last Sunday.

Yannick Maden leads the Tigers in singles wins with an 18-5 record overall. Yannick Maden and Zachary Rigsby have a 7-6 record in doubles play to lead the team in doubles victories.

This will be the 49th meeting between the two schools on the tennis courts. Miami leads the overall series 25-23. The two teams first met in 1968. In matches played at Clemson, the Tigers lead the series 11-6.