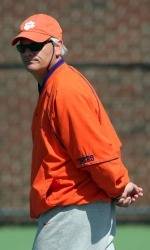 CLEMSON, SC – The Clemson men’s tennis team will play host to Big-Ten foe Wisconsin on Saturday morning at 10:00 a.m. at the Hoke Sloan Tennis Center on the university’s campus.

Clemson has a 2-3 record overall this season, as the Tigers are coming off a 6-1 victory over Furman. The Wisconsin men’s tennis team opened the spring season by earning a 6-1 victory over Butler and a 7-0 win over Western Illinois. The Badgers lost to Notre Dame 7-0 on February 10. Wisconsin is now 2-1 on the year.

This season, Yannick Maden leads the Tigers with a 15-4 record overall. Maden is 4-1 in dual matches. He has been playing number-one singles this season for the Tigers. Currently he is ranked 59th nationally this season in singles play.

Yannick Maden and Zachary Rigsby also play number one doubles for Clemson. The duo has a 7-4 record in doubles play and a 3-2 mark in dual matches.

This will be the eighth meeting between Clemson and Wisconsin on the tennis courts. Clemson leads the overall series 6-1. In matches played at Clemson, the Tigers lead the series 2-0. The two teams first met in the 1972 season.

As an added feature, free pizza will be given away between the doubles and the singles matches.