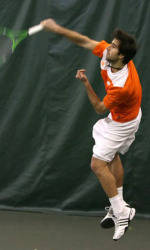 Clemson Will Play Host to Furman in Men’s Tennis

CLEMSON, SC – The Clemson Men’s Tennis team will play host to Furman on Wednesday afternoon at 2:00 p.m. at the Hoke Sloan Tennis center on the Tigers’ campus.

This will be the 92nd meeting between the Clemson and Furman on the tennis courts. The Tigers lead the overall series 72-18-1. Furman is one of Clemson’s oldest rivals as the two teams first met on April 17, 1923 with the Tigers winning 3-0 that day in a match played at Clemson.

The Furman match begins an eight-match home stand for the Tigers. After the Furman match, the Tigers will play host to Alabama, Navy, Dartmouth, Georgia Tech, Florida State, the College of Charleston, and Stetson over the next four weeks.