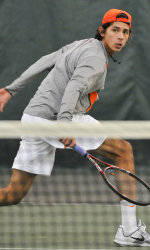 CLEMSON, SC – The Clemson men’s tennis team will play host to Furman on Friday afternoon at 2:30 p.m. at the Hoke Sloan Tennis Center on the Tigers’ campus.

Clemson is 8-2 on the year, while Furman is 0-7 this season. The Tigers are ranked 51st nationally according to the latest ITA poll.

This will be the 94th meeting between Clemson and Furman on the tennis courts. Clemson leads the overall series 74-18-1. The series began in 1923.

Clemson freshman Gerardo Meza has a 6-2 record this season in dual match play to lead the Tigers in that category.