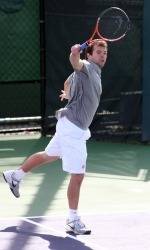 Clemson Will Play Host To #11 Duke on Sunday

This will be the last home match for three Clemson seniors, as Kevin Galloway, Robert Pietrucha, and Derek DiFazio will all be playing in their last home match.

This will be the 68th meeting between Clemson and Duke on the tennis courts. The Blue Devils lead the overall series 36-31. Clemson leads the series in matches played at Clemson 15-12.