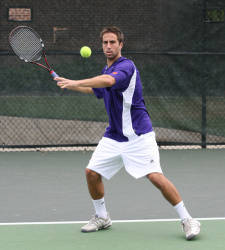 Clemson Will Play Duke and North Carolina This Weekend

CLEMSON, SC – The Clemson men’s tennis team will play at Duke on Friday and at 11th-ranked North Carolina on Sunday in the Tigers’ last regular season matches before next week’s Atlantic Coast Conference Tournament.

The Duke match will begin at 3:00 p.m. in Durham on Friday afternoon. The Tigers will play North Carolina in Chapel Hill on Sunday at 1:00 p.m.

Clemson’s Chuck Kriese is in his 33rd and final year as head coach of the Tigers. He will retire at the end of the season. He is currently the fifth winningest active coach in the nation and is the winningest coach in the history of the ACC.