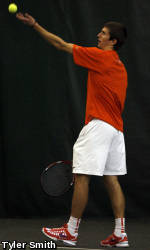 Clemson Will Play at Louisville Saturday

CLEMSON, SC – The Clemson men’s tennis team will play at the University of Louisville in Louisville, KY on Saturday afternoon at 5:00 p.m. The Tigers are 1-2 this season, having dropped matches to fourth-ranked Georgia and 27th-ranked LSU. The Tigers defeated the College of Charleston in the season opener. Clemson is ranked 68th nationally according to the latest ITA poll. The Cardinals are ranked 35th.

Clemson is led by Yannick Maden with a 13-4 record overall in singles. He is 2-1 in dual matches this season. The doubles team of Yannick Madden and Zachary Rigsby is 6-3 this season and the duo plays at number-one doubles.

This will be the third meeting between the two teams on the tennis courts. Louisville leads the overall series 2-0. The series began in 1998. The Tigers and Cardinals last met in 2005.