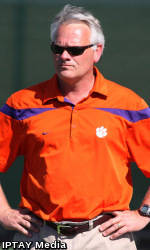 CLEMSON, SC – The Clemson men’s tennis team will play at Florida State Saturday afternoon at 12:00 p.m. in Tallahassee, FL. Clemson has a 5-7 overall record and a 2-0 mark in the ACC this season. Florida State is 12-3 overall and 3-0 in league play. The Seminoles are ranked 30th nationally according to the latest ITA poll.

Yannick Maden leads the Tigers this season with a 20-5 record overall in singles. He is ranked 49th nationally in singles play. The doubles team of Maden and Zachary Rigsby is ranked 53rd.

This will be the 35th meeting between Clemson and Florida State on the tennis courts. The series, that began in 1962, is tied 17-17.