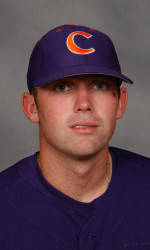 Clemson vs. Virginia Clemson (25-11, 10-5 ACC), ranked as high as #13 in the nation, will play host to #6 Virginia (32-8, 11-6 ACC) this weekend in a three-game series at Doug Kingsmore Stadium. Game times are 7:15 PM (Friday), 7:00 PM (Saturday), and 1:00 PM (Sunday). All three games will be broadcast live on the radio by Clemson Tiger Sports Network. The first two games will be shown live via webcast at ClemsonTigers.com for all three games.

The Series Clemson and Virginia have met 136 times on the diamond, with the Tigers holding a 100-36 lead in the series dating back to the 1955 season. Last year at Charlottesville, Virginia swept the Tigers by a combined score of 19-7, including victories by scores of 2-1, 10-2, and 7-4.

Two years ago at the 2005 ACC Tournament in Jacksonville, FL, the Cavaliers defeated Clemson twice in two games by scores of 8-1 and 5-4. That same season at Doug Kingsmore Stadium, the Tigers won two of three games. Clemson won the first two games by scores of 13-4 and 3-2, then lost to Virginia by a score of 9-2 in game-three of the series.

The Cavaliers have won six games in a row in the series and nine of the last 11 meetings since 2004. Prior to that span, Virginia had not defeated Clemson in back-to-back games since the 1974 season.

The Starting Pitchers In game-one, Virginia will start sophomore righthander Jacob Thompson (8-0, 1.32 ERA) on the mound. The Danville, VA native has made 10 starts for a total of 68.0 innings pitched. He has allowed 46 hits (.192 opponents’ batting average) and 18 walks with 70 strikeouts. He has not thrown a wild pitch and allowed just six extra-base hits as well.

The Tigers will counter with junior lefthander Daniel Moskos (3-2, 2.27 ERA) on Friday. The Alta Loma, CA native has made 17 relief appearances and two starts for a total of 31.2 innings pitched. He has allowed 27 hits (.248 opponents’ batting average) and 13 walks with 39 strikeouts.

In game-three, the Cavaliers will start junior lefthander Sean Doolittle (6-2, 2.42 ERA) on the mound. The Tabernacle, NJ native has made nine starts for a total of 52.0 innings pitched. He has allowed 45 hits (.233 opponents’ batting average) and 11 walks with 40 strikeouts. He has also given up just one home run this season.

Clemson will counter with sophomore lefty Ryan Hinson (3-1, 2.28 ERA) on Sunday. The Rock Hill, SC native has made nine starts for a total of 51.1 innings pitched. He has allowed 49 hits (.253 opponents’ batting average) and 14 walks with 43 strikeouts.

The Cavaliers Virginia, led by fourth-year Head Coach Brian O’Connor, enters the weekend series with a 32-8 overall record and 11-6 ACC mark. The Cavaliers defeated Richmond 12-5 on Tuesday in their last action, and split a rain-shortened series at home against Georgia Tech. Virginia, who is 9-5 on opponents’ home fields, are ranked as high as #6 in the nation and have not lost back-to-back games this season.

Virginia has outscored its opponents by a combined score of 326 to 127 this season, as the team is averaging 8.3 runs per game. The Cavaliers are hitting .333 with a .421 on-base percentage thanks to 175 walks and 59 hit-by-pitches.

Perhaps the team’s greatest strength is its baserunning, as the squad has swiped 95 bases in 117 attempts. Greg Miclat, who is hitting .404, has stolen a team-high 27 bases in 31 attempts. Brandon Guyer is hitting .430 with six homers and 40 RBIs, and has stolen 14 bases in 15 tries. Mike Mitchell is batting .366 with 15 steals as well.

The pitching staff has a 2.55 ERA and .244 opponents’ batting average. The team has allowed just 94 walks with 336 strikeouts, good for a 3.57 strikeout-to-walk ratio. Senior lefthander Casey Lambert has an 0.95 ERA and seven saves in 18 relief appearances. He has also allowed just 11 hits and three walks with 28 strikeouts. The team is fielding at a .968 clip as well.

The Tigers Clemson enters the weekend series with a 25-11 overall record and 10-5 ACC mark after falling to #4 South Carolina 4-2 in Columbia on Wednesday night. Clemson also won two of three games at Wake Forest last weekend. The Tigers, who are 18-5 at home and have not played a home game since April 4, also bring a #13 national ranking into the series.

Utility player Graham Stoneburner is the lone Tiger from the state of Virginia. However, the freshman is red-shirting in 2007 after suffering a torn ACL in January.

Boyd on a 10-Game Hitting Streak Red-shirt freshman outfielder Wilson Boyd (Hickory, NC) has been one of the bright spots of the plate of late for the Tigers. He is currently riding a 10-game hitting streak, as he is 14-for-32 (.438) during the streak. He has raised his season batting average to .295 and has 14 RBIs.

The highlight of his young career took place against Georgia on April 4 at Doug Kingsmore Stadium. He came off the bench and went 2-for-3 with two triples, two runs scored, and three RBIs. The first triple was a three-run triple in the seventh inning when the Tigers were trailing 10-5. Then with one out, no one on base, and the Tigers down a run in the ninth inning, he belted a triple and eventually scored on D.J. Mitchell’s single, as Clemson went on to win 11-10 in dramatic fashion.

Gamecocks Clip Tigers 4-2 in Columbia Four Gamecocks hit solo home runs to lead #4 South Carolina to a 4-2 victory over #13 Clemson at Sarge Frye Field on April 18. After hitting a solo homer in the first, the Gamecocks added three more solo homers in the third inning to take a 4-0 lead. Andy D’Alessio’s RBI groundout in the fourth inning put the Tigers on the scoreboard, but both teams were scoreless until the ninth inning. D’Alessio’s two-out, solo homer in the ninth cut South Carolina’s lead to two runs, but the Tigers could get no closer. Each team had six hits and did not commit an error. Matt Vaughn pitched 4.2 solid innings in relief, allowing just one run on three hits.