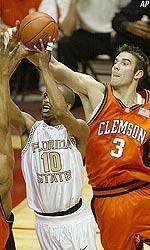 * Edward Scott has scored 46 points over his last two games, including 25 in a victory over North Carolina on Feb. 15. It was his sixth 20-point game of the season, and 13th of his career. Scott became the sixth Clemson player in history to start 100 games when he started against Duke on Feb. 9. He needs five rebounds to become the ninth player in ACC history to reach 1000 points, 500 assists and 400 rebounds in a career.

* Clemson won the first meeting with the Cavaliers, a 78-77 victory. It was Clemson’s first one-point victory in any game since the 1991-92 season. Olu Babalola made two free throws with 5.7 seconds left to give Clemson the victory.

* Clemson has improved its perimeter defense in recent weeks. Over the last four games opponents are just 25-90 on three-point shots.

* Sophomore forward Olu Babalola has scored 23 points over the last two games. He has made 8 of his last 15 field goals. He had a career high tying eight rebounds in the win over North Carolina.

* Sharrod Ford, who has had 11 points and nine rebounds against North Carolina, has made 7 of his last 9 field goals. He is shooting 59 percent for the year, best on the Clemson team among players who have taken at least 50 shots.