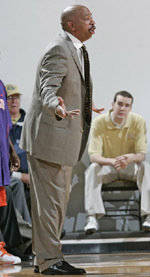 This will be the first meeting between Clemson and TexasA&M since the 1996-97 season. Clemson won that game in CollegeStation by a 76-64 score behind 21 points by Terrell McIntyre. GregBuckner, now with the Denver Nuggets of the NBA had 18. WhenClemson and Texas A&M met in the first round of the GreatAlaska Shootout in November of 1982, an ACC first occurred.Clemson’s Milan Belich scored a three-point goal at the buzzer inregulation to send the game into overtime. That was the first madethree-point goal in the history of the Atlantic Coast Conference.Clemson Head Coach Oliver Purnell and Texas A&M Head CoachBilly Gillispie have a history of improvement. Purnell has takenClemson to a six-win improvement so far this year, while Gillispiehas made a 12-win improvement over last year for Texas A&M.Both already have a top 10 improvement in NCAA history on theirrespective resumes. Purnell took Radford to a 15-game improvementin 1990-91, the seventh best in NCAA history. Gillispie took UTEPto a 17-game improvement in 2003-04, tied for the best in NCAAhistory. Making the NIT is a big step for both programs this year.This will be the first postseason tournament for Clemson since 1999when it went to the NIT. It is the first postseason tournament forTexas A&M since the 1994 NIT. Clemson was 4-4 in the secondhalf of the ACC season. No Clemson team has had a better secondhalf record since the league went to a 16-game format in 1991-92.Only North Carolina, Duke and Wake Forest had a better second halfrecord than Clemson this year. Clemson guard Shawan Robinson wasnamed second- team All-ACC Tournament this year. He had 41 pointsin 57 minutes in the two games combined against Maryland and NorthCarolina. He was 15- 24 from the field and 9-12 from 3-point land.Wednesday’s winner will face the winner of the Missouri vs. DePaulgame at a site and date TBA. Oliver Purnell has a 1-0 record vs.Texas A&M. As the head coach at Dayton his Flyers defeatedTexas A&M in Dayton by a 81-68 score on 12-21-99. Clemson has a10-11 all-time record in the NIT. The Tigers reached thechampionship game in their last appearance, 1999 vs. California,but lost, 61-60. Oliver Purnell has a 6-5 all-time record in theNIT, including a 2-2 ledger at Old Dominion and a 4-3 mark atDayton. He reached the Final Eight of the tournament in 2001.Clemson is 3-0 all-time on March 16, the only day with a perfectrecord between Jan. 1 and April 1. Wednesday’s game will not betelevised but it will be webcast. For more information, go towww.aggieathletics.com/AUA_live.php