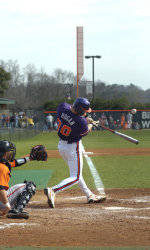 Clemson vs. South Carolina Clemson (23-9), ranked as high as #14 in the nation, will play host to #4 South Carolina (26-7) on Wednesday at Doug Kingsmore Stadium in the third of four scheduled matchups between the two rivals during the regular season. First pitch for Wednesday’s game is scheduled for 7:15 PM. The game will be televised live by CSS. The game will also be broadcast live on the radio by Clemson Tiger Sports Network. Live stats will be available on Clemson’s athletic website at ClemsonTigers.com as well.

The Series Clemson and South Carolina have met 277 times on the diamond, with Clemson holding a 162-113-2 lead in the series dating back to the 1899 season. South Carolina is Clemson’s most-played rival in history.

Earlier this season in March, the Gamecocks won both games of a weekend series by scores of 12-0 at Doug Kingsmore Stadium and 3-2 in Columbia.

Tiger Head Coach Jack Leggett is 27-22 against South Carolina as Clemson’s head coach, including a 13-10 record in games played at Clemson. The Tigers are 13-14 against a top-10 Gamecock club under Leggett as well.

The Starting Pitchers South Carolina will start sophomore lefthander Craig Thomas (0-0, 0.00 ERA) on the mound Wednesday. The Lexington, SC native has made two relief appearances for a total of 4.2 innings pitched. He has given up three hits (.176 opponents’ batting average) and one walk with six strikeouts.

The Tigers will counter with freshman lefty Doug Kingsmore Stadium. He allowed one run on four hits in that outing. Zoltak did not pitch against the Gameocks in either game in March.

The Gamecocks South Carolina, led by 11th-year Head Coach Ray Tanner, enters Wednesday’s game with a 26-7 overall record and 7-5 SEC mark after winning two of three games at #22 Florida this past weekend. The Gamecocks, who are 8-4 on opponents’ home fields, are ranked as high as #4 in the country.

South Carolina has outscored its opponents by a combined score of 281-114 this season. Six of its seven losses have been by one run. Offensively, the team is hitting .316 with a .406 on-base percentage, 57 home runs, and 162 walks. The team has swiped 33 bases in 38 attempts and has 28 sacrifice bunts. The Gamecocks are 24-0 when they total at least as many hits as their opponents and 2-7 when they get outhit.

The pitching staff has a 2.83 ERA and .225 opponents’ batting average. The team has allowed just 111 walks with 329 strikeouts. Junior righty Wynn Pelzer has a 2.45 ERA and 30 strikeouts in 22.0 innings pitched out of the bullpen.

The Gamecocks have one of the nation’s best defenses, as they have committed just 28 errors in 33 games, good for a .978 fielding percentage.

The Tigers Clemson enters the game versus South Carolina with a 23-9 overall record and 8-4 mark in the ACC after winning all five games last week, including a three-game sweep at Virginia Tech over the weekend. The Tigers, who are 18-5 at home this season, also bring a #14 national ranking into Wednesday’s game.

First-baseman Andy D’Alessio, who suffered a pulled groin in the second inning against Miami (FL) on April 1, did not play in any of the five games last week. D’Alessio is listed as questionable for Wednesday’s game.

Worth Noting * Clemson has won five straight road games after starting the season 0-4 on the road. * Clemson has an 8-0 record when it scores at least one run in the first inning.

Polls Clemson jumped to the #14 spot in the Baseball America poll and #14 in the Collegiate Baseball poll on Monday after going 5-0 in five games last week. Clemson also rose to #15 in the Sports Weekly poll.

Tigers Shake Up Pitching Staff With the emergence of senior righthander Daniel Moskos from the closer role to the weekend rotation.

Moskos made his starting debut at Virginia Tech on April 6, as the junior lefty allowed just one run in 4.0 innings pitched in that outing. Moskos had made 71 relief appearances from 2005-07 prior to his first career start. The owner of 16 career saves had never started on the mound in a Clemson uniform prior to the start in Blacksburg. However, he was used as a starter in the Cape Cod League in the summer of 2005. His ability to throw three or four different pitches for strikes was one reason Leggett opted to move him into the weekend rotation.

Clyne’s stellar senior season had a lot to do with the move as well. The Parkland, FL native is throwing harder than ever and has routinely hit the low 90s on the radar gun. This past offseason, Clyne focused on increasing his lower-body strength in the weight room, and he credits that to his higher velocity. He already brought a sharp breaking ball to the mound.

Farina Mowing Them Down Out of the Bullpen Junior righthander Alan Farina (Chuluota, FL) is 2-0 with a 4.00 ERA in 27.0 innings pitched over eight relief appearances and two starts in his first season in the Tiger program. He has also struck out 35 against only 11 walks and is holding opponents to a .168 batting average. In ACC regular-season games, he has 22 strikeouts in only 12.1 innings pitched as well, good for a 16.1 strikeouts-per-nine-innings-pitched mark.

He has been a strikeout machine out of the bullpen as well. In his eight relief appearances, he is 2-0 with a 1.77 ERA in 20.1 innings pitched. The power pitcher has also allowed just 10 hits (.141 opponents’ batting average) and three walks with 31 strikeouts (10.3 strikeout-to-walk ratio) out of the bullpen.

Tigers Sweep Hokies in Chilly Blacksburg Clemson, ranked #16 in the nation, swept Virginia Tech in chilly and windy Blacksburg, VA by a combined score of 19-10, as the Tigers won all three games by three runs. The Tigers outhit the Hokies .286 to .262 and hit 11 extra-base hits, including four homers. Marquez Smith went 4-for-11 with two homers. Clemson, who committed only two errors in the series, had a 2.55 ERA and 24 strikeouts against only seven walks.

In game-one, Smith hit a two-run homer to lead Clemson to a 6-3 win at Virginia Tech in a game that started on April 6 and ended on April 7 due to snow. Neither team could break through with big hits, as Clemson left 12 runners on base and Virginia Tech stranded 11. Mitchell had three hits, including two doubles. The Hokies totaled 13 hits, but they were all singles. Daniel Moskos, who allowed one run in 4.0 innings pitched in his first career start. The Tigers, who totaled five sacrifice bunts and three steals, did not commit an error in 44 chances as well.

In game-two, Taylor Harbin had two hits, including a solo home run, and Mitchell added two hits and two runs scored. Both teams had 10 hits as well.

In game-three, Doug Hogan blasted a three-run homer in the 10th inning to lead Clemson to a 5-2 win at Virginia Tech on April 8. Smith hit a solo home run in the first inning, but the Hokies scored single runs in the first and third innings to take the lead. Clemson tied the score in the seventh inning on Harbin’s sacrifice fly. Smith led off the 10th inning with and infield single, then Stephen Clyne picked up the save.