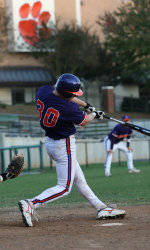 Clemson vs. South Carolina Clemson (26-14), ranked as high as #17 in the nation, will play host to #5 South Carolina (32-10) on Wednesday at Doug Kingsmore Stadium in the last of four scheduled matchups between the two rivals during the regular season. First pitch for Wednesday’s game is scheduled for 7:15 PM. The rivalry game will be shown live via webcast at ClemsonTigers.com as well.

The Series Clemson and South Carolina have met 278 times on the diamond, with Clemson holding a 162-114-2 lead in the series dating back to 1899. South Carolina is Clemson’s most-played rival in history.

Earlier this season in March, the Gamecocks won both games of a weekend series by scores of 12-0 at Doug Kingsmore Stadium and 3-2 in Columbia. Then on April 28 at Sarge Frye Field, the Gamecocks hit four solo homers in their 4-2 win. With the three wins, South Carolina has claimed the season series for the first time since 2001.

Tiger Head Coach Jack Leggett is 27-23 against South Carolina as Clemson’s head coach, including a 13-10 mark in games played at Clemson.

Bradley & Price Awards to Be Given Wednesday After Wednesday’s game, Clemson’s MVP of the four-game series will be given the Bob Bradley Award in a ceremony at home plate. Also, South Carolina’s MVP will be given the Tom Price Award. Both Bradley and Price served as Baseball SIDs at their respective schools for decades. Bradley passed away in 2000, while Price still serves as the official scorer for Gamecock baseball games. Price will be working on the South Carolina radio network broadcast during Wednesday’s game.

South Carolina’s leaders in the series this season include Justin Smoak, who is 5-for-12 (.417) with two homers and four RBIs. Phil Disher is 4-for-12 (.333) with a homer and six RBIs, and James Darnell is 3-for-9 (.333) with two home runs and five RBIs. Mike Cisco has allowed just two runs on nine hits in 12.2 innings pitched over two starts as well.

The Starting Pitchers South Carolina will start freshman righthander Blake Cooper (5-0, 1.82 ERA) on the mound Wednesday. The Neeses, SC native has made six starts and four relief appearances for a total of 34.2 innings pitched. He has allowed 30 hits (.233 opponents’ batting average) and 12 walks with 25 strikeouts. He has also given up just two extra-base hits, both doubles.

The Tigers’ starter on the mound has yet to be determined.

The Gamecocks South Carolina, led by 11th-year Head Coach Ray Tanner, enters Wednesday’s game against Clemson with a 32-10 overall record and 10-8 SEC mark after falling in two of three games at #19 Mississippi this past weekend and defeating Davidson 6-2 on Tuesday. The Gamecocks, who are 9-6 on opponents’ home fields, are ranked as high as #5 in the country.

South Carolina has outscored its opponents by a combined score of 344-162 this season. Six of its 10 losses have been by one run. Offensively, the team is hitting .304 with a .396 on-base percentage, 74 home runs, and 200 walks. The squad entered the week leading the nation in homers per game. The team has also swiped 39 bases in 47 attempts and has 31 sacrifice bunts.

The Gamecocks are 29-0 when they total at least as many hits as their opponents and 3-10 when they get outhit. One of those three wins was against Clemson on March 4 when the Tigers outhit the Gamecocks 8-7.

The pitching staff has a 3.09 ERA and .231 opponents’ batting average. The team has allowed just 140 walks with 398 strikeouts. Senior righty Jeff Jeffords has a 1.67 ERA and 33 strikeouts against only five walks in 27.0 innings pitched out of the bullpen this season.

The Gamecocks have one of the nation’s best defenses, as they have committed just 40 errors in 42 games, good for a .975 fielding percentage.

The Tigers Clemson enters Wednesday’s game with a 26-14 overall record and 11-7 ACC mark after falling twice in three games to #6 Virginia at home over the weekend and losing to Elon 13-12 at home on Tuesday. The Tigers, who are 19-8 at home and in the midst of an 11-game homestand, also bring a #17 national ranking into the week.

The pitching staff has a 3.37 ERA and .246 opponents’ batting average. It has combined to strike out 340 against 125 walks. Daniel Moskos has a team-high six saves, while Stephen Clyne has a 1.00 ERA along with two saves in 19 relief appearances. The team is fielding at a .971 clip as well.

Elon Outlasts Tigers 13-12 in Slugfest Tuesday Elon used 12 hits and nine walks to defeat #17 Clemson 13-12 at Doug Kingsmore Stadium on April 24. After the Phoenix scored four runs in the top of the second, Clemson scored six runs in the bottom of the second, highlighted by Andy D’Alessio and Hogan, his second of the game, in the seventh inning along with a two-out, two-run single by Wilson Boyd added three hits. Clemson outhit Elon 13-12, but committed a costly error in the fifth inning that led to four unearned runs.