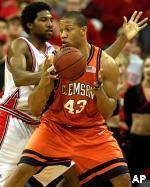 * Clemson guard Edward Scott will make his 101st career start in Columbia, SC when the Tigers play South Carolina on Wednesday night. The game will be played close to his hometown of Eastover, SC. Scott became the sixth Clemson player in history to start 100 games when he started against Duke on Feb. 9. He needs 12 rebounds to become the ninth player in ACC history to reach 1000 points, 500 assists and 400 rebounds in a career.

* Clemson will make its first appearance in the Carolina Center in Columbia. Clemson is 5-0 since 1985- 86 when it plays its first game in a building in its first year of operation. It will be the first of two trips to new buildings for Clemson in a two-week period. Clemson will play at Maryland’s new Comcast Center on Feb. 25.

* Chris Hobbs recorded his first double-double of the season at Duke, as the junior had 10 points and 11 rebounds. It was his 10th double-double as a Clemson player, fourth among active ACC players.

* Clemson head coach Larry Shyatt is 2-2 in his career against South Carolina. The Tigers have lost two in a row to the Gamecocks, but have won six of the last eight. Clemson is 8-4 vs. SEC teams since 1994-95.

* Sophomore guard Chey Christie has led Clemson in scoring in each of the last two games and has scored 42 points. It is the best scoring performance in back to back games of Christie’s career. He has made 17 of his last 30 shots from the field and 10- 11 from the foul line. He had a career high 25 points in the win over Georgia Tech last Wednesday night.

* Clemson has held the opposition to 7-39 three-point shooting over the last two games combined.

* Clemson has two wins by two points or less this year in ACC play. This the first time Clemson has done that since the 1989-90 season.

* Edward Scott is second in the ACC in assist/turnover ratio with a 2.3/1 ratio.