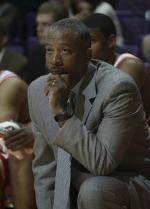 Clemson Coaches Face Former Team Clemson head coach Oliver Purnell and assistant coach Dr. Ron Bradley both served as head coach at Radford and will be coaching for the Tigers against their old school on Monday evening at Littlejohn Coliseum. Purnell was the head coach at Radford for three years (1988-89 through 1990-91), while Bradley succeeded Purnell for the 1991-92 season and remained as head coach for a total of 11 seasons (through 2001-02). Bradley had been on Purnell’s staff for the 1990-91 season.

Purnell led Radford to a 44-42 record in his three seasons, his first three years as a head coach. Radford had records of 15-13, 7-22 and 22-7 while he was the leader of the program. The 22-7 record in 1990-91 was a 15-game improvement over the previous season, at the time the third greatest one-season improvement in Division I history. It is still the ninth greatest on that list according to this year’s NCAA record book.

Bradley coached at Radford for 12 years, including one as an assistant. In his first year he took Radford to a 20-9 record, including a 12-2 mark in the Big South. One of his assistants on that staff was current Radford coach Byron Samuels. Samuels left after one year, but returned to Radford under Bradley for the 2001-02 season. So, Samuels was an assistant under Bradley at Radford for Bradley’s first and last seasons during an 11-year stay.

This will not be the first time Purnell has coached against one of his former schools. As the coach at Dayton he coached two games against Old Dominion and had a 1-1 record against the Monarchs. He lost to Old Dominion at Dayton in 2000-01, then defeated Old Dominion in Norfolk last season.

Clemson vs. Radford Series Clemson has a 2-0 record against Radford and ironically, both of those Tiger victories were recorded against coaches currently on the Clemson staff. In 1989-90 a Cliff Ellis coached Clemson team defeated an Oliver Purnell coached Radford team by a 114-76 score. In 1998-99, a Ron Bradley coached Radford team by a 70-37 score. Both games were held at Littlejohn Coliiseum. Bradley is currently Purnell’s top assistant at Clemson.

Purnell and Bradley picked the wrong seasons to play Clemson when they coached the Highlanders. The Tigers’ 1989-90 team went on to win the ACC regular season championship behind first-team All-ACC players and future NBA first-round draft choices Dale Davis and Elden Campbell. That is the only Clemson team to win the league title and it was done during a strong year for ACC basketball. That year two other ACC teams, Duke and Georgia Tech, went to the Final Four. Clemson’s 1998-99 team that Bradley faced, went on to win 20 games and advanced to the NIT finals, the only Clemson team in history to make the finals of a postseason tournament.

In the 1989-90 Clemson victory, the Tigers had six double figure scorers. Derrick Forrest led Clemson with 20 points in just 23 minutes, while Davis had 17 points and 13 rebounds in just 23 minutes. Campbell had 16 points, seven rebounds and a career high tying eight blocked shots. Clemson shot 55.7 percent from the field and scored 69 points in the second half, still tied for the fourth most productive half in Clemson history. The Tigers blocked 16 shots in the game still a school record for a single game.

In the 1998-99 Tiger victory, Clemson held the Highlanders to just 17 points in the first half and 12-53 shooting for the game. That .226 field goal percentage is still the fifth best field goal percentage defense for a single game in Clemson history. Harold Jamison led the Tigers with 13 points, while Terrell McIntyre added 12. McIntyre was the only Clemson player t play over 20 minutes in the game.

Clemson’s only losses to teams currently in the Big South came against Winthrop and Virginia Military. The Tigers lost to Winthrop at Clemson by a score of 66-61 on December 18, 2001. Clemson lost to VMI 64-63 on Feb. 12, 1947. The VMI loss took place when both Clemson and VMI were in the Southern Conference. So, Winthrop is actually the only Big South school to beat Clemson while it was in the Big South.

As far as the other current Big South schools are concerned, Clemson is 15-0 against Charleston Southern, 6-0 against UNC Asheville, 5-0 against Coastal Carolina, 3-0 vs. Liberty and 2-0 vs. High Point.

Clemson vs. South Carolina State Review Chris Hobbs scored 18 points, and Shawan Robinson added 16 off the bench, including 11 in the last nine minutes to lead Clemson to a 77-74 victory over South Carolina State on December 20. Clemson had just two players in double figures, but three more had eight or nine as the Tigers moved to 5-4 for the season.

South Carolina State was led by Thurman Zimmerman with 19 points and 10 rebounds to go with four assists. He made 7-7 free throws. Shawn Wiggins, who had signed out of high school by Oliver Purnell when Purnell was at Dayton, had 16 points on 6-8 shooting, including 4-9 on three-point goals.

Clemson shot 55.2 percent for the game, including at least 50 percent in each half. The Tigers made a season best 8-20 three-point goals and the three-point percentage was the second best by the Tigers this season. Clemson had 15 turnovers, down from an average of 22 per game over the first eight games of the season, and down from the 25 turnovers it had made against Cincinnati in the previous game.

The game was close throughout as neither team had more than a six-point lead the entire game. Clemson jumped out to a 6-0 lead, but the Bulldogs went on a 15-6 run to take a 15-12 lead. SC State’s largest lead was 21-16 in the first half at the 11:08 mark. After scoring 21 points in the first nine minutes, Clemson held the Bulldogs to just 15 over the last 11 minutes and held a 38-36 lead at intermission.

Clemson trailed 65-63 with five minutes left, but hit 5-6 shots from the field and 3-3 from the line over the last five minutes. Clemson broke a 70-70 tie with 1:00 left on an old fashioned three-point play by Ford. After SC State cut the margin to one 13 seconds later, Robinson connected on a corner jumper with 22 seconds left to give Clemson a 75-72 margin.

After Brian Mason made it 75-74 with seven seconds left, Demeco Heath fouled Babalola with 6.5 seconds left. Babalola, who had made two free throws with 5.7 seconds left to beat Virginia last year, made both ends of the 1-1 to give Clemson the 77-74 lead. Heath missed a 30-foot three-point goal that would have tied the game and the Tigers came away with the win.

Tigers Face One of Nation’s top Scorers Clemson will have to turn up the defense against Radford and leading scorer Whit Holcomb-Faye. The 6-1 sophomore guard from Winston-Salem is currently 12th in the nation in scoring with a 22.1 average. He is one of just 40 players nationally to average at least 20 points per game this year. He has the highest scoring average of all current and future Clemson opponents on an individual basis. Holcomb-Faye also leads the Radford team in assists with 33, so he obviously has the ball in his hands often. He has attempted 61 free throws in just eight games, a big under eight attempts per game.

Final Game before Christmas This will be Clemson’s final game prior to the Christmas break. The team will have off from the end of Monday night’s game until reporting back to Clemson for the night of December 26. The first game after Christmas will be against Boston College on December 30.