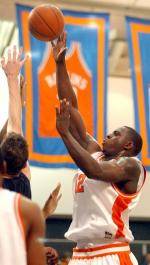 * Tuesday’s game will feature two of the nine players in ACC history who have reached the 1000 point, 500 assist, 400 rebound club. Clemson guard Edward Scott reached the club in the victory over Virginia on Feb. 18. Maryland guard Steve Blake became a member earlier this year.

* Scott has scored at least 20 points in four straight games, at least 25 points in three consecutive games. He is just the second Clemson player since 1969 to have three consecutive 25-point scoring games (Will Solomon is the other). Over his last four games, Scott has averaged 26.8 points per game, 4.5 rebounds and 3.8 assists per game. He has made 11 of his last 18 three-point shots. The opposing guard he has been assigned to has made just 2 for his last 14 shots from the field.

* Sophomore Olu Babalola is coming off his best scoring game as a Clemson player. He scored 15 in the win over Florida State, as he hit 6-12 shots from the field.

* During Clemson’s three-game winning streak, senior Tomas Nagys has averaged 11.3 points per game pulled in 15 rebounds, including 10 offensive and has made 21 of 25 free throws.

* Maryland won the first meeting between the two teams in January at Clemson by a 52-47 score. The 52 points scored by Maryland were the fewest by the Terps in eight years.

* Clemson has 15 overall wins this season, already eclipsing the total of 13 it had last year. Clemson has five ACC wins to eclipse the total of last year. It is Clemson’s highest ACC win total since the 1998- 99 season, Larry Shyatt’s first, when Clemson had five league wins. Clemson still has four ACC games remaining.

* Clemson continues to lead the ACC in field goal percentage. Clemson has connected on .465 for the season. Clemson shot 50 percent from the field in its recent victory over Florida State.