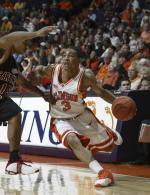 * Clemson is 1-0 against High Point. The only previous meeting took place last year in the Greensboro Coliseum, a 91-65 victory. That was Clemson’s largest victory margin of the season.