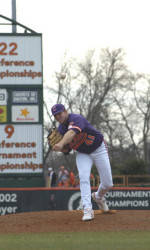 Clemson vs. Georgia Tech Clemson (27-14, 11-7 ACC), ranked as high as #17 in the nation, will play host to #19 Georgia Tech (26-15, 13-7 ACC) this weekend in a three-game series at Doug Kingsmore Stadium. Game times are 7:15 PM (Friday), 7:00 PM (Saturday), and 2:00 PM (Sunday). All three games will be broadcast live on the radio by Clemson Tiger Sports Network. All three games will also be shown live via webcast at ACCSelect.com. Live stats will be available at ClemsonTigers.com for the series as well.

The Series Clemson and Georgia Tech have met 190 times on the diamond, with the Tigers holding a narrow 94-93-3 advantage dating back to the 1902 season. In 2005, Georgia Tech won two of the three games at Doug Kingsmore Stadium. Then in 2006, the two teams met seven times.

The Yellow Jackets claimed the final two games of the 2006 regular-season series in Atlanta after Clemson won game-one. Then in the ACC Tournament at Jacksonville, FL on May 25, Clemson won 3-2 on Ben Hall’s walkoff single. Two days later, Georgia Tech stayed alive in the tourney with an 8-7 victory in 10 innings. But hours later, Clemson was victorious 16-11 to advance to the ACC Tournament Championship game.

With the all-time series tied, the two teams met at the 2006 College World Series. Like its meeting in Omaha in 2002, the Tigers defeated the Yellow Jackets, this time by a score of 8-4 after Clemson fell behind 4-0. Clemson scored all eight of its runs in the eighth inning. Andy D’Alessio’s three-run homer gave Clemson the lead for good.

Tiger Head Coach Doug Kingsmore Stadium. He was 3-5 against Georgia Tech as Western Carolina’s head coach, meaning he is 31-28 against the Yellow Jackets in his career.

The Starting Pitchers In game-one, Georgia Tech will start sophomore lefthander David Duncan (5-2, 3.03 ERA) on the mound. The New Richmond, OH native has made 11 starts for a total of 74.1 innings pitched. He has allowed 71 hits (.254 opponents’ batting average) and 19 walks with 67 strikeouts.

The Tigers will counter with junior lefthander Daniel Moskos (3-3, 2.29 ERA) in game-one on Friday. The Alta Loma, CA native has made 17 relief appearances and three starts for a total of 35.1 innings pitched. He has allowed 33 hits (.260 opponents’ batting average) and 16 walks with 46 strikeouts.

In game-two, the Yellow Jackets will start sophomore righthander Eddie Burns (3-1, 2.98 ERA) on the mound. The Hiram, GA native has made seven starts and six relief appearances for a total of 48.1 innings pitched. He has yielded 46 hits (.250 opponents’ batting average) and 13 walks with 45 strikeouts.

In game-three, Georgia Tech will start senior righty Ryan Turner (3-3, 3.99 ERA) on the mound. The Dahlonega, GA native has made 11 starts for a total of 56.1 innings pitched. He has allowed 74 hits (.322 opponents’ batting average) and nine walks with 34 strikeouts.

The Yellow Jackets Georgia Tech, led by 14th-year Head Coach Danny Hall, enters the series with a 26-15 overall record and 13-7 ACC mark after falling to Georgia 10-7 at Turner Field in Atlanta on Tuesday. The Yellow Jackets, who are 5-7 on opponents’ home fields, also swept #20 N.C. State at home last weekend. Georgia Tech is ranked as high as #19 in the nation as well.

The pitching staff has a 4.32 ERA and .278 opponents’ batting average on the season. The team has allowed 131 walks with 319 strikeouts. Payne and Wieters each have three saves, while reliever Jared Hyatt has a 7-0 record and 2.39 ERA in 37.2 innings pitched. The team is fielding at a .971 clip as well.

The Tigers Clemson enters the series against #19 Georgia Tech a 27-14 overall record and 11-7 ACC mark after splitting a pair of home midweek games. On Tuesday, Elon outslugged Clemson 13-12, then the #17 Tigers beat #5 South Carolina 14-5 on Wednesday. The Tigers, who are 20-8 at home and in the midst of an 11-game homestand, lost two of three games to Virginia at home last weekend as well.

The pitching staff has a 3.36 ERA and .246 opponents’ batting average. It has combined to strike out 350 against 130 walks. Daniel Moskos has a team-high six saves, while Stephen Clyne has a 1.27 ERA along with two saves in 20 relief appearances. The team is fielding at a .971 clip as well.

Boyd Receives Bob Bradley Award Red-shirt freshman outfielder Wilson Boyd (Hickory, NC) received the 2007 Bob Bradley Award, given to the Tiger MVP of the four-game series against rival South Carolina. In four starts, he was 5-for-14 (.357) with two runs scored, a triple, and four RBIs. He became the first Tiger freshman to win the award, which has been given annually since 2001. Boyd, who is hitting .417 in the month of April, has raised his batting average to .308 on the season.

Tigers Pound Gamecocks 14-5 in Series-Finale A seven-run seventh inning and 16 hits highlighted #17 Clemson’s 14-5 victory over #5 South Carolina at Doug Kingsmore Stadium on April 25 in the last of four regular-season matchups between the two rivals. Wilson Boyd, who received the Bob Bradley Award for being Clemson’s MVP in the four-game series, was 2-for-4 with a triple and four RBIs. Taylor Harbin added three hits and three RBIs. All 10 Tigers who played in the field scored at least one run and nine had at least one hit. Starter D.J. Mitchell pitched 6.0 innings to earn the win, as he allowed just one run on four hits with six strikeouts.