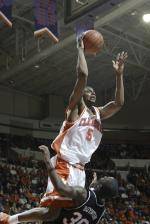 This will be the first regular season meeting between Clemsonand Georgia since the 1964-65 season. The two schools have metthree times in postseason play since then, twice in the NIT andonce in the NCAA Tournament. When Clemson faced Georgia in the 1996NCAA Tournament one of Clemson’s assistant coaches was currentGeorgia head coach Dennis Felton. Felton served as an assistantcoach under Rick Barnes from 1994-98. Clemson went to the NCAATournament each of his last three years with the Tiger program, theonly time Clemson has advanced to the NCAA Tournament threeconsecutive years in its history. Both Clemson head coach OliverPurnell and Georgia head coach Dennis Felton are in their firstseasons with their respective programs. Purnell won 88 games in hislast four years at Dayton prior to coming to Clemson. Felton won 87games in his last four years at Western Kentucky prior to hisarrival at Georgia. Georgia forward Damien Wilkins played fourgames for NC State against Clemson prior to coming to the Bulldogprogram. Clemson won three of the four games and the Clemsondefense held Wilkins to 12-37 shooting from the field. However,Wilkins scored 22 points and had seven assists against Clemson thelast time he faced the Tigers, leading to a 34-point State win.Clemson and Georgia will play in one of three basketball games atPhilips Arena on Saturday. Prior to the Clemson vs. Georgia game,Georgia Tech, ranked 10th in the nation, will face St. Louis. Afterthe Clemson game, the Atlanta Hawks will face the Orlando Magic ina 7:30 PM NBA game. Clemson is coming off a 76-61 loss to SouthCarolina. Olu Babalola was a bright spot for the Tigers as thejunior forward recorded his first career double-double. The nativeof London, England had 11 points and 11 rebounds in the contest.The rebound figure was a career high. Clemson junior center SharrodFord continues to rank high in a number of ACC categories. Thenative of Maryland is third in the ACC in rebounding with a 9.0average, ranks second in blocked shots with 3.0 per game, standsfifth in field goal percentage at .588 and is 13th in scoring at14.0 per game. Clemson has lost two games in a row to Purdue andSouth Carolina, who are a combined 14-0 so far this season. Clemsonis in the middle of a stretch when it plays five games in 10 days.Only five NBA teams will play more games between Dec. 13-22 thanClemson.