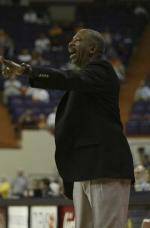 * Clemson is 1-0 liftime against Gardner Webb, a 71- 61 victory in Anderson, SC on December 14, 2002. Clemson overcame a 29-27 deficit at halftime to gain the victory thanks to a 44-point second half. Edward Scott led the Tigers with 17 points, while Ray Henderson added 14 off the bench. Chey Christie added 13. Clemson made 27-64 shots from the field in the game, including 17-33 in the second half. Otis Daniels led Gardner-Webb with 15 points, the only player in double figures.

* Clemson’s opener will be part of a doubleheader at Littlejohn Coliseum on Friday evening. The Tigers tip off at 6:00 PM followed by the Lady Tigers against South Carolina in the second game at 8:30 PM. Clemson’s season ticket total for men’s games is up over 400 over last season to 5,249.

* Friday night’s game with Gardner-Webb opens the 36th season of basketball in Littlejohn Coliseum. It will be the the first game with all renovations to the facility completed. The facility went through a $35 million renovation over the last two years. Clemson is 367-143 for its 510 games in the facility, a 72.1 percent winning percentage. That includes a strong 237-28 record in non-conference games, a .895 winning percentage.

* Chris Hobbs is the only scholarship senior on the Clemson rsoter this year. He enters his senior season ranked 20th on Clemson’s career rebound list with 527 and is tied for 10th in field goal percentage with Tree Rollins at 53.94 percent.

* Clemson won both of its exhibition games, with strong all-around performances. The Tigers beat NIKE Elite 85-68 on November 7 by a 85-68 score, then stopped EA Sports 89-76 on November 17. Clemson had six double figure scorers in both games. Clemson was especially effective in the rebounding area, winning the boards 97-43 in the two games combined. Chey Christie added 31 points in the two games. Shawan Robinson came off the bench in both games, but still had 22 points and 16 assists in his 46 minutes of play.