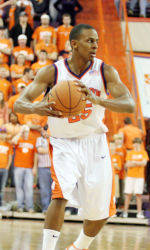 Clemson vs. Furman Basketball Game Will be ’80s Night’ at Littlejohn Coliseum

The Clemson versus Furman men’s basketball game Wednesday night will have an ’80s Night’ theme in conjunction with the Tigers’ first home game of the season. Fans of all ages are encouraged to dress up in their favorite 80s attire. Prizes will be given to those fans who wear the best costumes. The game is scheduled to tip off at 7:30 PM from Littlejohn Coliseum.

All season long, a $10,000 shooting contest will take place as well. In the women’s home opener last Friday versus Arkansas, a contestant hit one shot from half court before missing the second. Contestants making both shots will win $10,000. The Solid Orange Fan of the Game will also be chosen to compete for $50,000 at the end of the season. Show your Solid Orange pride and bring your friends to vote so that you can have a chance to win that grand prize.