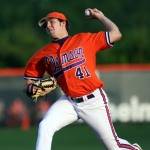 Saturday’s game will be televised live by Regional Sports Network and be available on FSN South. The games on both Friday and Sunday will be also shown live via webcast at ACCSelect.com. All three games will be broadcast live on the radio by Clemson Tiger Sports Network. Live stats will also be available at ClemsonTigers.com for all three games.

The Seminoles hold a 31-10-1 advantage over Clemson all-time in games played at Florida State. The Tigers hold a 23-22 lead in ACC regular-season games.

Tiger Head Coach Jack Leggett is 22-30 against the Seminoles as Clemson’s head coach, including a 4-14 mark at Dick Howser Stadium. All 52 games Leggett has coached against Florida State have been against a Seminole team ranked in the top 25 by at least one poll, including 46 games against a top-10 Florida State squad.

The Starting Pitchers In game-one, Florida State will start senior righthander Bryan Henry (12-0, 2.59 ERA) on the mound. The Tallahassee, FL native has made 14 starts for a total of 90.1 innings pitched. He has allowed 74 hits (.228 opponents’ batting average) and 21 walks with 95 strikeouts.

The Tigers will counter with junior lefthander Daniel Moskos (3-3, 2.20 ERA) in game-one on Friday. The Alta Loma, CA native has made 17 relief appearances and five starts for a total of 49.0 innings pitched. He has allowed 43 hits (.246 opponents’ batting average) and 22 walks with 62 strikeouts.

In game-two, the Seminoles will start junior righty Danny Rosen (2-1, 3.50 ERA) on the mound. The Miami, FL native has made 20 relief appearances and two starts for a total of 36.0 innings pitched. He has yielded 28 hits (.211 opponents’ batting average), including only four extra-base hits, and 10 walks with 48 strikeouts. He has also totaled a team-high eight saves on the season.

In game-three, Florida State will start junior righthander Ryan Strauss (8-1, 3.03 ERA) on the mound. The Tampa, FL native has made 12 starts and one relief appearance for a total of 68.1 innings pitched. He has given up 65 hits (.253 opponents’ batting average) and 28 walks with 43 strikeouts. He has also allowed just one steal in five attempts. Clemson’s starter for game-three on Sunday has yet to be determined.

The Seminoles Florida State, led by 28th-year Head Coach Mike Martin, enters the series with a 42-7 overall record and 20-4 ACC mark after sweeping Maryland in College Park last weekend. The Seminoles, who are 32-2 at home this season, are ranked #2 in the nation by all three major polls. They have also not played a home game since playing host to #2 North Carolina from April 20-22.

The Seminoles are one of the nation’s best offensive teams, as they are hitting .362 with a .445 on-base percentage. They have also totaled 138 doubles, 42 home runs, 236 walks against only 246 strikeouts, and 60 stolen bases in 77 attempts while averaging 9.2 runs per game.

Among the team’s other impressive stats include a 7-1 record in one-run games. The Seminoles have not lost a game when trailing at the end of the third, fourth, fifth, sixth, seventh, or eighth inning this year. Florida State has also been outhit in just six of its 49 games this season.

The pitching staff has a 3.31 ERA and .235 opponents’ batting average. The team has allowed 160 walks with 385 strikeouts and only 18 stolen bases in 32 attempts. Junior righty Danny Rosen has eight of the team’s 12 saves. The Seminoles sport a .973 fielding percentage as well.

The Tigers Clemson enters the series at #2 Florida State with a 32-17 overall record and 15-9 ACC mark after falling to Furman 6-3 at home on Wednesday and downing Wofford 12-3 behind five homers on Tuesday night at West End Field in Greenville, SC. The Tigers are also coming off two wins in three games at home against Boston College over the weekend. The Tigers, who are 7-6 on opponents’ home fields, have not played in hostile territory since April 18 (at #4 South Carolina) and are ranked as high as #16 in the nation.

The team is hitting .288 with a .372 on-base percentage. Brad Chalk is hitting a team-best .407 with a .531 on-base percentage, but has sat out nine of the last 10 games due to a back injury. Doug Hogan is hitting .326 with nine homers and 29 RBIs, while Andy D’Alessio hit two homers in a game for the 10th time in his career on Tuesday night against Wofford. D’Alessio is also hitting .302 with 11 homers and 35 RBIs. Marquez Smith has also totaled 10 homers and a team-high 43 RBIs as well.

The pitching staff has a 3.41 ERA and .253 opponents’ batting average. It has combined to strike out 428 against 162 walks. Daniel Moskos has a team-high six saves and 2.20 ERA, while Stephen Clyne has a 2.00 ERA along with two saves in 24 relief appearances. The team is fielding at a .971 clip as well.

Clemson has six players on its travel roster this weekend from the state of Florida. Clyne (Parkland), D’Alessio (Naples), David Kopp (Margate), Buddy Munroe (Miami), and Smith (Ocala) all hail from the Sunshine State.

Furman Holds Tigers To Six Hits in 6-3 Victory Four Furman pitchers held #16 Clemson to six hits in the Paladins’ 6-3 victory at Andy D’Alessio two-out, two-run single in the third inning gave Clemson a 2-1 lead, but the Paladins scored the next five runs. Paul Ortenzo’s two-run double in the sixth inning and Bobby Hubbard’s two-run triple in the eighth inning highlighted Furman’s upset win. Taylor Harbin was 2-for-3 with a home run to lead Clemson, who was just 1-for-15 with runners on base. Five Tiger pitchers combined for 14 strikeouts as well.