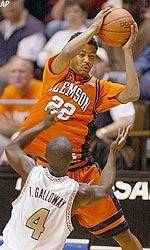 * Clemson and Florida State split a pair of games this year. This the third straight year the two teams have met in the ACC Tournament and the fourth time in the last five years. Each of the previous four ACC Tournament meetings between the teams the team that has won the most recent regular season meeting has lost the tournament game.

* Clemson has four players on its roster from North Carolina. In addition to Robinson, Chris Hobbs (Chapel Hill), Walker Holt (Greensboro) and Ray Henderson (Charlotte) are all from the Tar Heel State.

* Clemson leads the ACC in fewest turnovers committed per game. Clemson is committing just 13.5 turnover per game. The Tigers have averaged just 9.8 turnovers per outing over the last six games.

* Olu Babalola scored a career high 17 points on 7-9 shooting in Clemson’s most recent game against Georgia Tech. He had been 1-14 in his three previous games.

* This will not be the first game Clemson has played in Greensboro this year. Back on Nov. 27 Clemson defeated High Point 91-65. It was the most points Clemson has scored in a game this year. The Tigers made 9-20 three-point shots in the facility and shot 55 percent overall. Clemson is 5-18 lifetime in the ACC Tournament in Greensboro.

* Clemson has 15 overall wins this season, already eclipsing the total of 13 it had last year. It marks the third straight year Clemson has improved on its victory total over the previous year. A win in the ACC Tournament will give Clemson six wins against ACC opponents this year. That would be the high figure for the program since 1998.

* Clemson has been to the ACC Tournament Championship game just one time in 50 years (1962) and has never won the title.