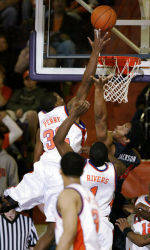 CLEMSON, SC – Tickets for the Clemson vs. Duke men’s basketball contest to be held on Thursday, February 22 are sold out, announced the Clemson University Athletic Department Ticket Office on Monday afternoon. The Tigers and Blue Devils will tip off at 9:00 p.m. at Littlejohn Coliseum and the game will be televised by ESPN.

The ticket office announced last week that the Clemson-North Carolina game on Wednesday, January 17 is also sold out. The game between Clemson and the Tar Heels is scheduled for a 7:00 p.m. tip and will also be televised by ESPN.