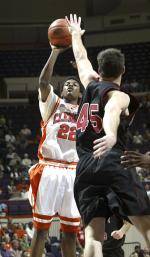 Boston College head coach Al Skinner and Clemson head coachOliver Purnell are both in their 16th years as a head coach andTuesday night’s game will be the 458th game for each. Purnell has262 wins in his first 457 games and Skinner has 245 wins in hisfirst 457 game. Skinner and Purnell both played college basketballduring the same era. Skinner played at UMASS and his senior yearwas the 1973-74 season. Purnell played at Old Dominion and hissenior year was the 1974-75 season. Purnell’s daughter, Lindsay,might have some mixed emotions about Tuesday’s game. She is afreshman at Boston College. Purnell also has a daughter, Olivia, asenior at Southern Cal. This is the first meeting between Clemsonand Boston College since the 1976-77 season, Tree Rollins’ senioryear at Clemson. The Tigers scored 128 points in a 128-76 victory,the second highest scoring game in Clemson history. That game wasplayed in Milwaukee, WI at Marquette’s Christmas tournament. The52-point victory margin is tied for 13th largest in Clemsonhistory. Clemson also defeated Boston College the previous year inCharlotte at a tournament by an 80-60 margin behind 18 points andseven blocked shots by Rollins. Clemson has lost four games, butthe four teams defeated the Tigers are a combined 35-5. Thatincludes a 8-0 Cincinnati team that is ranked fifth in the December28 Sagarin Rankings. Boston College’s only loss to to a 9-0 St.Joseph’s team that is ranked in the top 10 of both polls enteringgames of December 27. Clemson is coming off a 74-58 win overRadford, Clemson’s second largest victory margin of the season.Chey Christie led the Tigers with 20 points, while Sharrod Ford hadhis fourth double-double of the year with 12 points and 11rebounds. Shawan Robinson might be the hottest player on theClemson team in terms of shooting the basketball. The sophomore hasmade 21-23 free throws for the season and has made 9 of his last 19three-point shots. He has scored in double figures in three of hislast four games, including each of his last two. Tuesday’s gamewith Boston College will be Chris Hobbs’s 99th at Clemson. He needsjust one rebound to reach 600 for his career. His 100th game as aTiger will be against Duke on January 3. Ironically, his fatherworks at the Duke Medical Center. Clemson has not allowed anopponent to shoot over 4 percent from the field this year and onlytwo have reached 45 percent for a game. Clemson is at +8.7 in termsof rebound margin this year, ahead of the record of +8.2 set in1998-99.