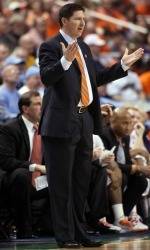 Clemson vs. Arizona Game on Dec. 10 to be Nationally Televised

CLEMSON, SC – The final tipoff time of Clemson’s 2011-12 men’s basketball schedule was announced Monday. The Dec. 10 non-conference matchup between Clemson and Arizona in Tucson is set for 4:00 PM Eastern time at the McKale Center. The game will be broadcast nationally by Fox Sports Net.

The addition of the Arizona game gives Clemson a guarantee of at least 13 national television appearances during the 2011-12 regular season. The other 12 games will be shown on the ESPN family of networks, with the potential for one more in the final round of the Hawaiian Airlines Diamond Head Classic.