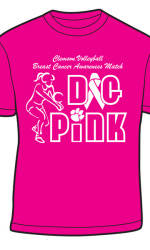 Watch Clemson vs. Maryland On Demand on TigerCast

Clemson improves to 13-8 overall and 4-6 in the ACC, while Maryland is now 14-8, and 5-5 in the conference. The Tigers will return to action Saturday at 7:00 pm as they play host to Boston College. Fans are encouraged to stop in after the football game, and those who show their ticket will have a chance to win a Best Buy gift card.

Friday marked the annual Dig Pink match for the Tigers, who donned the color to help raise breast cancer awareness. So far, Clemson fans have donated more than $3,000 and bought a record 75 pink t-shirts. The shirts will be available for the rest of the season, and fans can still make contributions online.

The fans helped create a wild atmosphere, with a season-high 1,624 fans in attendance. The Tigers did not disappoint, as they handled Maryland for much of the evening with several big individual performances.

Freshman Hannah Brenner was outstanding on the night, falling just short of a triple-double. She posted a career and team season-high 46 assists, a career-high nine kills, and eight digs, while leading the Tigers to a .312 hitting night against Maryland.

Serenat Yaz had her ninth straight double-double with 11 kills and 10 digs, and Natalie Patzin had 10 kills and 12 digs for her third double-double of the season in the win. Alexa Rand, who entered the match ranked sixth nationally with a 1.50 blocks per set average, raised that number after registering eight blocks in four sets Friday.

The Tigers went into intermission up 2-0, as Brenner spread the ball around offensively. The Tigers also used nine blocks in the first two sets to help set the defensive tone. Clemson entered the match with a 2.93 blocks per set average, and bettered that with 12 in four sets on Friday.

The fourth set was all Tigers. Brenner guided one of the most efficient offensive sets of the season, picking up 15 assists and finding Adeleye eight times for kills in the frame, including five times during a 5-1 Tiger run to take a 10-6 lead. Brenner also added four kills in six attacks in the set, and the Tigers sided out on 13 of 15 attempts.

Clemson will head to Wake Forest and Duke next week before returning home for a four-match homestand beginning Nov. 5.