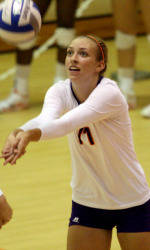 Clemson (2-0) held Tennessee State (1-1) to .049 hitting with 11 blocks, while notching a .374 mark on the offensive end. Cansu Ozdemir seemed to be everywhere defensively, picking up 17 digs. Clemson’s defense was outstanding and the Tigers were able to side-out on 75% of opponents’ serves in the match, including a 9-10 mark in the third set.

Freshman Kamryn Sherman and Kristin Faust each finished a dig shy of a double-double, as Sherman closed with 17 assists and nine digs, and Faust pounded ten kills with nine digs for the second straight match.

Hannah Brenner led Clemson with 21 assists, finding Adeleye on most of her ten kills. Adeleye started the night where she left off on Friday, with eight kills on her first eight swings. In the first two matches, she has 25 kills in 33 attacks with only two errors. Mo Simmons also made her presence felt, picking up eight kills and four blocks.

The Tigers jumped out to a 6-3 lead in the first set and were able to hold the cushion for most of the set. After a Sherman ball0-handling error put the margin at 15-12, Clemson ran off the next seven points on Natalie Patzin’s serve and fueld by two blocks from Rand. The teams traded points until Faust closed the set with a kill from Brenner.

Clemson again opened up a quick lead in the second set, taking a 12-6 advantage after a block from Rand and Simmons. TSU closed the margin to 16-13 on an ace, but a Hoover timeout sent Clemson on a 9-6 run to close the set.

The third set was all Clemson, taking a14-5 lead behind three Patzin kills and a kill and two solo blocks from Rand. With an 18-10 lead, Clemson scored the final seven points of the match, during which Rand and Simmons each put down three kills. Simmons had five kills in the set, while Rand added four and the two solo blocks. The Tigers hit .471 as a team in the set, as each setter had seven assists.

Clemson returns to action at 6:00 pm as they take on South Carolina State in Jervey after Loyola and Tennessee State close their Bash trip with a clash at 4:00 pm.