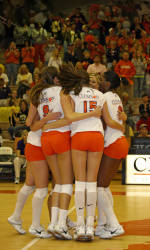 Clemson Volleyball Up To #20 In AVCA Poll

Clemson won the ACC title, going 21-1 in conference matches, and will be making its first appearance in the national tournament since 1999. The Tigers will face Alabama at 7:00 pm at Jervey Gym.

Junior Danielle Hepburn boasts an impressive .408 hitting percentage for the year and is on pace to set the school single-season record. She is battling with senior Meghan Steiner for the mark, as the native of Crystal Lake, IL is currently hitting .407. Hepburn leads the team with 409 kills as well as 153 total blocks, while Steiner owns 296 kills and 118 blocks for the year.