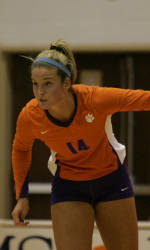 The Tigers gutted out the five-set victory, their third in four tries, in front of a season-high 1211 fans in Cassell Coliseum. Clemson will now travel to Charlottesville, VA for a Sunday 1:00 pm match at the University of Virginia.

Clemson took a 1-0 lead in the match behind All-ACC player, Sandra Adeleye, who had seven kills and a block assist in the opening set, a 25-20 Tiger victory. Clemson turned a 2-1 deficit into a seven point lead with a 9-1 run to go up, 10-3, and held on. Tech closed the set to three at 17-14, but a 5-1 Tiger run gave Clemson a 22-17 advantage, and they put the set away when Justine Record’s serve sailed into the net.

The Tigers raced out to an 11-5 lead in the third set, as Clemson went back to Adeleye, who had three kills and a block in the first ten points. Simmons also added a kill, a block, and her career-best third ace of the match. The Tigers stretched the lead to 14-6, before Virginia Tech responded with a six-point run to close the gap to 14-12, but a miscommunication by the Hokies’ back line and two straight aces from Yaz gave Clemson a 17-12 lead. The teams traded points after the Tigers took a 20-16 lead, and Clemson closed the set, 25-20 on a block from Rand and Simmons.

Virginia Tech wasted no time in the fourth set, running out to an 8-4 advantage behind Gostling and Baarendse. Facing a 9-6 deficit, the Tigers scored six of the next eight to take their first lead at 12-11. The teams traded blows, with Clemson forcing a timeout at 18-16. A timely Tech timeout sent the Hokies on a  7-1 run, giving them a 23-19 lead. A pair of Yaz kills brought the Tigers closer, but Record closed out the set with a kill, sending the match to a fifth set.

Clemson opened up the deciding set with a  4-1 lead behind a kill and a block from Rand, but Virginia Tech responded with a four-point run to take a 5-4 lead. Clemson went back to Rand, who hammered the tying kill to make it 5-5. Simmons fueled a run with two kills and a solo block to give the Tigers a 10-9 lead. The teams traded points, but with the match tied at 11-11, Clemson took over, scoring the next four points, and winning on an attack error by Record.