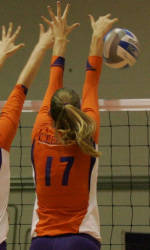 Wins this weekend against RPI #9 Duke and #55 Wake Forest would go a long way in the Tigers’ bid for a fourth consecutive NCAA Tournament selection.

Duke Blue Devils – 7:00 pm Friday – Durham, NCLivestats: GoDuke.com  The Blue Devils were picked to win the ACC in the preseason coaches poll  Duke leads the all-time series with the Tigers, 32-21, including two straight 3-2 wins in Clemson  Duke has won the last three matchups, but Clemson won the previous three, including two in a row in 2007 when the Blue Devils were ranked in the top 15 nationally.  Head coaches Jolene Hoover and Jolene Nagel are each among the top-40 active coaches in wins  Duke, like Clemson, uses a balanced attack; Becci Burling leads the Blue Devils in kills with 3.19 per set, and Christiana Gray leads the ACC in hitting percentage at .406  Duke beat Clemson in five sets earlier this season on Sept. 24. The Tigers had a season-high 21.0 blocks in the match, led by Alexa Rand’s 15 (13 BA, 2 BS). Serenat Yaz led the Tigers with 13 kills and 20 digs, and Mo Simmons finished just shy of a triple-double, posting 10 kills, 9 digs, and 8 blocks. The Devils had 82 kills to Clemson’s 48, and had five players in double-digits in kills and four in digs.

Wake Forest Demon Deacons – 6:00 pm Saturday – Winston-Salem, NCLivestats: ClemsonTigers.com  The Demon Deacons are coached by former Clemson standout, Heather Kahl Holmes  Kahl played at Clemson from 1991-94, with her final two seasons under Jolene Hoover  She was a 1994 AVCA all-Regional selection and was 2nd-team All-ACC  Kahl ranks 4th in Clemson history in assists and assists per set. Her 80 assists against UNC in 1994 still ranks second in Clemson history for a single match. She also had 35 digs in that match, which ranks fourth in team history  Wake Forest is 13-8 overall, and 6-5 in the ACC, and are coming off a 3-0 win over Florida State and a 0-3 loss ot Miami  The Demon Deacons are led by Kadijah Fornah, who is averaging 3.26 kills per set so far this season, 6th-best in the ACC  Clemson leads the All-Time series with the Demon Deacons, 25-11  Wake defeated Clemson, 3-0 (28-26, 26-24, 25-23), by a combined six points, the minimum required to win a match. Adrea Beck had 15 kills to lead the Deacs, while Serenat Yaz and Sandra Adeleye recordeddouble-digits for Clemson. The Tigers were only able to muster six blocks on the day, and hit .186.

Clemson Quick Notes:  Clemson ranks 6th nationally and first in the ACC with a 2.97 blocks/set average  Freshman Hannah Brenner is the ACC’s reigning Rookie of the Week after leading Clemson to a 2-0 record last weekend, averaging 12.1 assists, 1.6 kills, 1.6 digs, and 1.3 blocks per set.  Alexa Rand leads the conference and is 3rd in the nation in individual blocking, with a 1.58 per set average.  Clemson recorded 21.0 total blocks against the Blue Devils on Sept. 25, only two short of a school record, and followed that with 20.0 against the Tar Heels in only four sets.  The Tigers have gone to five sets six times, and have a 4-2 mark in those contests. Last season, the Tigers played in 10 five-set matches with a 3-7 record in those matches  The Tigers defeated NC State in Clemson last weekend in five sets, keeping a 25-match win streak alive against the Wolfpack  Serenat Yaz has twelve double-doubles this year to lead all Tigers, and has nine of them in ACC matches this year  Yaz is averaging 2.90 kills per set this year after averaging just 0.23 a season ago, an improvement of 2.68 per set.  Alexa Rand set the school record for block assists in a single match when she had 13 against Duke.  Freshmen and sophomores have accounted for 100% of the team’s kills and blocks, and 1366.5 of 1386.5 points (98.6%)  The current squad features five sophomores and five freshmen  Cansu Ozdemir is the lone senior, and the team’s captain  Sandra Adeleye recorded her 500th career kill at Miami, accomplishing the feat in only 163 sets.  Head Coach Jolene Jordan Hoover is in her 18th season as Clemson’s head coach, and her 374 wins as an ACC head coach rank third in ACC history  Clemson will play the 1200th match in school history on Oct. 30