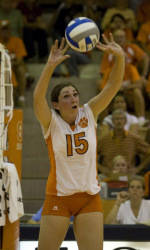 CLEMSON, SC (ClemsonTigers.com) – The Clemson volleyball team will travel to Chicago, Ill. on Friday to take part in the DePaul Challenge. The Tigers (2-1)will play the Loyola-Chicago Ramblers (1-3) on Friday evening at 6:00 pm eastern, and then will oppose the Western Illinois Leathernecks (1-4) on Saturday morning at 11:00 am eastern. Clemson plays the host DePaul Blue Demons (2-1)on Saturday night at 8:30 pm eastern.

The Tigers don’t have much history with either of the three schools, but do hold a 4-0 combined mark against the teams. The Tigers have three wins against DePaul, with the most recent victory in 1996. The other win came against Loyola in 1989. The Tigers and Leathernecks have never met.

The team has not played in Illinois since 2003, but are certainly no strangers to the state. Three current players hail from Illinois in Tanya Mirutenko. Additionally, head coach Jolene Jordan Hoover is from the state and played volleyball at Illinois State, where she is a Hall of Famer. Assistant Coach Jodi Steffes Welp is also from the state, but will not make the trip due to her scheduled induction to the Clemson Hall of Fame on Saturday.

In Murphy’s case, she will face off with her sister, Bridget Murphy, when the Tigers and Leathernecks meet Saturday at 11:00 am eastern. Bridget is a freshman defensive specialist who has played in every set for Western Illinois this season. Kelsey is an All-American setter who has countless national and conference awards for the Tigers.

After the first week, senior Lia Proctor leads the ACC in kills/set with 4.33 (52K/12S) and freshman Didem Ege is second in digs/set with 4.75. She is the ACC’s all-time leader in that category and can move into 10th in ACC history with 14 more digs. Brittany Fennell is among the leaders in hitting percentage (4th; .409) and blocking (6th; 1.18 B/S).

From a team standpoint, Clemson has 691 wins in program history, inching closer to the 700-win plateau. With 11 more wins, Hoover will hit 350 at Clemson.

Clemson enters the Challenge after taking second in the Big Orange Bash over the weekend. The Tigers fell in five sets to South Carolina before bouncing back to beat Winthrop and the College of Charleston. The Tigers played outstanding defense, racking up 39.0 blocks in 12 sets, and only allowed opponents to hit at meager .159 mark.

After the trip to Chicago, the Tigers will head to Atlanta for the Courtyard Classic at Georgia Tech. Clemson will play Tech, Southeast Missouri, and Ole Miss in that tournament.