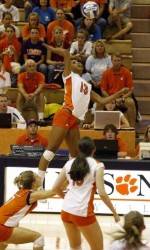 The Clemson volleyball team will travel north for two matches in North Carolina this weekend. The Tigers (16-7, 6-5 ACC) will begin their second run through the ACC with the NC State Wolfpack (7-18, 0-10 ACC) on Friday night at 7:00 pm and the North Carolina Tar Heels (11-10, 7-3 ACC) at 4:00 pm on Halloween. At the midway point, the Tigers are in a three-way tie for fifth place in the conference.

Clemson has had significant contributions from three players pushing for all-freshman honors. Alexa Rand ranks 11th nationally in hitting percentage and 17th nationally in individual blocking, leading Clemson to the 7th-best block average in the nation. Sandra Adeleye is third on the team in kills/set and is hitting .373 on the season and averages more than a block per set. Natalie Patzin is second on the team in kills and fourth in digs. She is second among all ACC freshmen in kills and kills/set.

Senior Lia Proctor leads the Tigers at 3.68 kills/set and is ranked second in the conference in that area. Didem Ege has her sights set on the ACC record for digs, and needs only 122 more to become the conference’s all-time leader.

NC State has struggled recently, losing twelve consecutive matches, including nine in three sets. The Tigers downed the Pack earlier in the season by a 3-0 margin (25-10, 25-19, 25-16) in Jervey Gym on September 26. Lia Proctor led Clemson with 13 kills, while Kelsey Murphy had a double-double (33 assists, 11 digs). The Tigers held NC State to a -.010 hitting night, their second-best defensive effort of the season. The Tigers only allowed 24 kills in the match, the fewest they have allowed all season. Overall, Clemson has defeated NC State 23 consecutive times.

The Wolfpack are led by Kelly Wood and Keri Dumar offensively, each of whom average 1.92 kills/set. Libero Lindsay Benac averages 3.82 digs per set, while Wood is second at 3.16. In all, eight members of the team average more than a kill per set, giving setter Alex Smith several options.

Clemson will play North Carolina Saturday at 4:00 pm. North Carolina defeated Clemson 3-0 in their meeting at Jervey on Sept. 25. Having entered that match at 4-7, the win propelled them to seven wins in their next 10 outings. Until a loss at #17 Florida State on Sunday, they had won six of their past seven matches, including a win against Duke in front of more than 12,000 fans before Late Night with Roy.

The Tar Heels have four regular players averaging more than two kills per set, and have hit .211 overall this year. They have alternated between two setters for much of the year, and have seen 14 players seen significant action in matches this season.

The two matches will give the Tigers an opportunity to move up in the conference standings, and possibly catch a team ahead of them in the Tar Heels, who play third-place Georgia Tech on Friday night. After the two matches in North Carolina, Clemson will travel to Maryland and Boston College on Nov. 6 and 8, respectively.