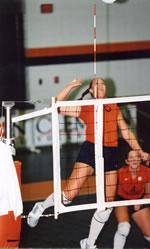 Clemson Volleyball To Travel To Georgia On Wednesday

CLEMSON, SC – The Clemson volleyball team will travel to Athens, GA on Wednesday to take on the Georgia Bulldogs in the Ramsey Student Center. The match is scheduled to start at 7:00 p.m.

The Tigers are 11-28 all-time against Georgia, and 5-5 under head coach Jolene Jordan Hoover. Clemson has won the last five meetings with the Bulldogs, including a 3-2 win last year in Jervey Gym.

The Bulldogs are 5-3 entering Wednesday’s match with the Tigers, with wins over Stetson, Loyola-Chicago, Morehead State, Kent State and Georgia Southern. Julia Petruschke has a team-best 136 kills with a 4.39 kills per game average. Petruschke leads the team at the net with 38 blocks and a 1.31 blocks per game average. Alexandra Oquendo has 75 kills with a .375 hitting percentage, and Luresa Forsythe has recorded 99 digs with a 3.19 digs per game average. Margot Wallace has handed out 366 assists with 59 digs and 15 blocks.