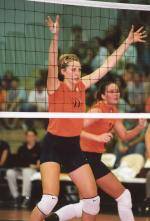 Clemson Volleyball To Take On Duke On Sunday

The Clemson volleyball team will travel to Durham, NC, on Sunday, Oct. 20 to take on Duke. The first serve is scheduled for 2:00 p.m.

The Tigers enter the match with a 13-9 overall record and a 4-3 mark in conference play. Clemson is 14-23 all-time against the Blue Devils, but hold an 11-9 mark under head coach Jolene Jordan Hoover. This season the Tigers have posted a 2-1 record on the road against conference teams, with wins over Maryland and Virginia.

Duke enters Sunday’s match with a 16-6 overall mark and a 4-3 record in the ACC, after upsetting 20th-ranked Georgia Tech in five games on Tuesday night in Durham, NC. This season the Blue Devils have defeated Virginia, Maryland, NC State and Georgia Tech in conference play, but lost decisions to Wake Forest, Florida State and #11 North Carolina

The Blue Devils are led by Krista Dill with 189 kills and a .295 hitting percentage. Jill Sonne has posted 185 kills and 206 digs, while Katie Gilman has tallied 187 kills and 164 digs. Stephanie Istvan has handed out 566 assists, and Arielle Linderman has recorded 309 assists. Rachel Vander Griend leads Duke at the net with 82 blocks (19 solo) and a 1.12 blocks per game average. Josie Weymann has recorded a team-best 227 digs and a 3.20 digs per game average, while Istvan is second on the team with 184 digs.