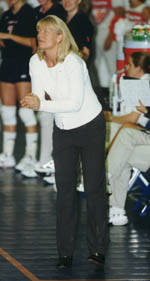 CLEMSON, S.C. – The Clemson volleyball team will play host to the Big Orange Bash Friday and Saturday at Jervey Gym.

The Tigers enter the tournament with a 2-2 overall record. On Wednesday night, Jolene Jordan Hoover’s team handed Georgia its first loss of the season, 3-1, in Athens. It was only the fourth time since 1977 that Clemson has defeated the Bulldogs on their home court. Clemson opened its season at the Colorado Powerbar Invitational in which the team posted a 1-2 record. The Tigers lost to #23 Colorado (3-1), defeated Oral Roberts (3-1) and lost to then-#24 Loyola Marymount 3-2.

The Mountaineers (0-4) enter this weekend’s contest with losses to Cental Florida, Air Force and Florida International suffered at the Central Florida Fall Invitational as well as a 3-1 loss at Chattanooga. Clemson and Appalachian State have met on the court eight times, with the Tigers winning seven of those contests. Most recently, the Tigers played the Mountaineers at the Auburn Invitational in 2000. Appalachian State won that meeting, 3-1 (8-15, 15-12, 15-3, 15-10), handing the Tigers their first loss of the rivalry.

UNC Wilmington enters this week’s schedule with a 3-0 record after winning the High Point Invitational with wins over Howard, South Carolina State and High Point. The Seahawks travel to Elon University for a Tuesday night match before playing Appalachian State on Friday in the first match of the Big Orange Bash. Clemson is 2-0 against UNC Wilmington, with wins in 1986 and 1991. The Tigers also hold a winning record against teams from the Colonial Athletic Association. Clemson is 13-7 all-time against CAA opponents.

The Wright State Raiders (3-1) opened their season at the Pepsi/Super 8 Invitational with wins over Eastern Illinois, Montana and Central Michigan. Ohio State handed the Raiders their only loss (3-0) of the season Tuesday night in the Wright State home opener. This will be the first meeting between the Tigers and the Raiders. Clemson is 3-1 against the Horizon League, with wins over Cleveland State, Illinois-Chicago and Loyola.