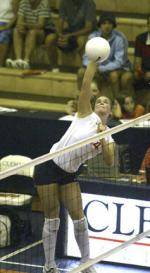 CLEMSON, S.C. – The Clemson volleyball team will play host to the Big Orange Bash Friday and Saturday in Jervey Gym. This is the 14th year of the tournament, and the Tigers are looking to defend their 2002 tournament title.

The tournament begins at 1:00 p.m. Friday, as Clemson and College of Charleston take the court. The Cougars will play Texas Tech at 4:30 p.m. on Friday, while the Tigers return to the court at 7:00 p.m. to take on Winthrop. On Saturday morning at 9:00 a.m., Winthrop and Texas Tech will square off, followed by Winthrop and College of Charleston at 11:30 a.m. The tournament will conclude on Saturday afternoon at 2:00 p.m. as the Tigers face Texas Tech.

The Tigers enter this weekend’s tournament with a 1-3 record after defeating Furman 3-0 on Wednesday evening. Clemson is led by Lori Ashton with 56 kills, a 4.00 kills per game average and a .337 hitting percentage. The middle hitter also leads the team at the net with 17 total blocks (5 solo) and a 1.21 blocks per game average. Leslie Finn is second on the team with 37 kills, Liz Beckham has posted 33 kills with a 3.67 kills per game average and Ryane Beasley has tallied 33 kills and 12 blocks (one solo). Lindsey Abbott has a team-best 43 digs, and Stephanie Haskell has handed out 139 assists.

The Winthrop Eagles are 3-0 entering this weekend’s contest with wins over UNC-Wilmington, Wofford and Mercer. Mary Hock leads the Eagles in kills with 40 and kills per game with a 4.00 average. Tori Grafeman has posted 33 kills with a .325 hitting percentage, and Lindsey Remmers has tallied 26 kills with a .323 hitting percentage. Remmers has a team-high 20 blocks (three solo) with a 2.00 blocks per game average, and Emily Heckl has handed out 120 assists. The Tigers own a 7-4 all-time record against the Eagles with a 6-3 mark at Clemson. The last meeting between the two teams was in 1999, as the Tigers defeated Winthrop 3-0 in Jervey Gym.

The Texas Tech Raiders enter this weekend with a 4-0 record after capturing the Islander Invitational last weekend in Corpus Christi, TX. The Raiders are led by Kelly Johnson with 72 kills, a 5.54 kills per game average and a team-high 10 service aces. Angela Mooney has 43 kills, a .425 hitting percentage and a team-best 15 blocks (one solo), while Kiley Lyons has added 32 kills with a .459 hitting percentage. Laura Grote has recorded 40 digs and has handed out 154 assists, averaging 11.85 assists per game. The Tigers and Texas Tech have only met on the court once, as Clemson fell to the Raiders in Lubbock, TX during the 2002 season at the Four Points Sheraton/Red Raider Classic.

Admission to all Clemson home volleyball matches at Jervey Gym is free to the public.