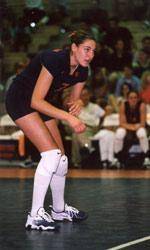 The Clemson volleyball team will play host to 21st-ranked Georgia Tech Friday, Oct. 11 in Jervey Gym. The first serve is slated for 7:00 p.m. Admission is free to all home volleyball matches in Jervey Gym.

The Tigers enter Friday’s match with a 13-7 overall record and 4-1 mark in conference play, after defeating Florida State and NC State last weekend. On the season, Clemson is 3-3 in away matches, 0-3 at neutral sites, but boasts a 10-1 mark in Jervey Gym. The Tigers hold a 27-11 all-time record against Georgia Tech. Under Jolene Jordan Hoover, the Tigers have only lost three times to the Yellow Jackets on their home court (1996, 2000, 2001).

The #21 Yellow Jackets are 18-3 overall and 4-1 in conference play entering Friday’s match, after posting a 1-1 mark in ACC play last weekend. Georgia Tech dropped a five-game decision to #11 North Carolina on Saturday night and defeated Florida State in five games on Sunday. Lynnette Moster leads the team with 389 kills and a .377 hitting percentage. The outside hitter has posted a 5.48 kills per game average and has served up a team-best 27 aces. Lauren Sauer is second on the team with 251 kills, while Alexandra Preiss has tallied 232. Marisa Aston has recorded 215 kills, and Kele Eveland has handed out a team-best 1036 assists. Preiss is the team’s top blocker with 93 total blocks (11 solo).