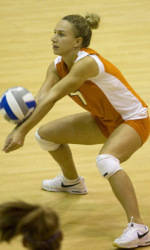 CLEMSON, SC – Clemson Volleyball will play host to the Virginia Tech Hokies and Virginia Cavaliers on Friday and Saturday, respectively. Both matches are slated to begin at 7:00 p.m. Saturday’s match was originally scheduled for 6:00 p.m., but has been pushed back to accommodate fans who wish to attend after the football game.

Friday’s match will feature an RA challenge. The RA’s who bring the most students from their floor will win a pizza party for their floor. Also, the first 50 Girl Scouts who enter will receive a free girl scout patch. Alumni weekend sign-in will be at the promotions table and Dig Pink T-shirts are still on sale for $10.

Clemson (21-8, 11-6 ACC) enters the match having won six of their past seven matches. Lia Proctor is the reigning ACC Player of the Week, and Sandra Adeleye was honored the week before that.

Didem Ege will likely break the ACC’s all-time digs record in the match, as she enters with 2,233 career defensive saves, while Brittany Eskola of North Carolina (2005-08) holds the mark of 2,238. Ege is already the ACC’s all-time leader in digs/set as well at a 4.90 figure.

Virginia Tech enters at 12-16 overall and 9-8 in conference. The Hokies have dropped five of their past seven after a five-game winning streak, which included a 3-2 victory against the Tigers. The Hokies have five players who average more than two kills per set, led by Felicia Willoughby, who also leads the team and is third in the ACC at 1.22 blocks/set.

In the first matchup, the Tigers took the first two sets, and held a 21-14 lead before the Hokies made a dramatic comeback, winning the final three sets to remain unbeaten at home. Justine Record had 26 kills and Jennifer Wiker had 15 kills. Libero Jill Gergen had an ACC season-high 37 digs as well. Proctor led Clemson with 19 kills and 22 digs, while Alexa Rand had nine kills and six blocks as well, while Adeleye and Natalie Patzin each hit double-figures in kills.

Virginia (12-16, 7-10 ACC) have won five of their last eight after starting the ACC season 2-7. Simone Asque has played well lately, earning ACC Player of the Week twice in the past month. She averages 3.80 kills/set to lead the Cavaliers, who have a 3-7 mark away form Memorial Gym.

In the first matchup on Oct. 16, Lia Proctor 15 kills paced the Tigers to a .363 hitting day, which Clemson won, 3-0 in Charlottesville. Defensively, Clemson held Virginia to a .099 hitting day, and only 28 kills. The Tigers, meanwhile, had 44 kills against only 11 attack errors.

The Tigers will close out the 2009 regular season on Friday, Nov. 27 at 7:00 pm against Georgia Tech. Clemson is vying for its third consecutive NCAA Tournament bid.