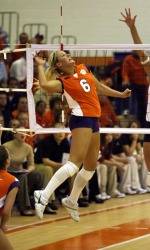 During their four seasons at Clemson, Abbott and Hepburn have led the Tigers to 80 total wins while splattering their names across the record books. Abbott set the program record for attempts over a career this season and owns top-10 marks for career kills and kills per set. She boasts 301 kills in 2008 in just under 1,000 attempts.

Hepburn, meanwhile, holds school career records in hitting percentage, block assists, total blocks and blocks per set. She leads the team this season with 398 kills and her 1.45 blocks per set average ranks first in the ACC and ninth nationally. The two have been constants in the Tiger line-up, starting 121 matches apiece while playing in nearly every set. Their efforts this season have helped Clemson hit a conference-leading .260 clip with an ACC-best 2.78 blocks per set average.

Fans can follow the action for both matches via livestats by accessing www.clemsontigers.com. Saturday’s match will also be broadcast online at ACCSelect.com.

Scouting The Opposition Maryland enters the final weekend of conference play with a 6-23 ledger and a 2-15 mark against league foes. Most recently, the Terps fell to Virginia and Virginia Tech. Katie Usher leads the squad with 255 kills while hitting a .268 percentage and tying for the team lead with 93 total blocks.

The Eagles dropped a pair of 3-0 matches last weekend to the Cavaliers and Hokies to fall to 7-22 overall and 1-16 in the ACC. Jordan Meredith owns a team-high 267 kills while Taylor Williams has recorded 253 for Boston College. The Eagles will take on Georgia Tech on Friday night before heading to Clemson for the Tigers’ Senior Night.

Clemson Against The Terps, Eagles The Tigers have won five straight matches over the Terrapins to take a 30-27 lead in the series score. Clemson swept Maryland in College Park earlier this season and also posted a 3-0 win over the Terps at Jervey Gym last season. The Tigers and Terps are tied with 10 wins apiece in matches played in Clemson, SC.

With a 3-0 win over Boston College on Oct. 17, the TIgers improved to 8-2 all-time against the Eagles. The last three wins have been sweeps for Clemson, including the 2007 meeting at Jervey Gym.