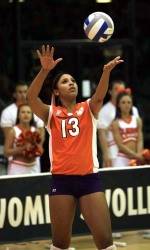 CLEMSON, SC – The Clemson volleyball team will open its 2009 spring season on Saturday as the Tigers travel to the College of Charleston Spring Tournament. Matches will be held at the Carolina First Arena as well as at the Johnson Center. The six teams competing will play four matches in a round-robin format to determine seeding for a playoff in the afternoon.

In addition to the Tigers and host-Cougars, North Carolina, Charlotte, Charleston Southern and Coastal Carolina will be participating.

Clemson will face Charlotte in the first match of the day at 9:00 am at the Johnson Center and will then play Coastal Carolina at 11:00 am on the main floor of the arena. The Tigers will take on the College of Charleston at 12:00 pm before wrapping up Round 1 action against Charleston Southern in the Johnson Center at 2:00 pm.

The teams will then be seeded based on their game records. The third, fourth, fifth and sixth seeded teams will play at 3:00 pm in the first round of the elimination bracket with winners taking on the top two seeds at 4:00 pm. The final match will be held at 5:00 pm at the Carolina First Arena

The Tigers will take 10 players on the trip, including five starters from the 2008 squad that posted a 23-9 record and advanced to the second round of the NCAA Tournament. Juniors Lia Proctor earned first-team All-ACC accolades in 2008 and have been three-year starters at the setter and outside hitter positions, respectively. Didem Ege is also an all-conference junior who has been the team’s libero for the past three years. Cansu Ozdemir, a sophomore from Istanbul, Turkey, and freshman Brittany Fennell will also be back on the court this spring.

Three other players who earned their first letters last fall – Lacy Hayes, Lisa Jedlicka, Katie Sharpe – will also return. Hoover will gain the services of freshman hitter Brooke Kohler, who was injured for the 2008 season, and Jessica Williams, a right-side hitter who sat out last fall after transferring from NC State.