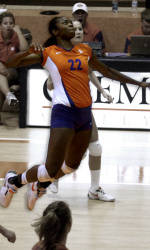 Both matches will be broadcast live on TigerCast, and will have livestats available at Clemsontigers.com.

Wake Forest is first up on Friday. The Demon Deacons are coached by former Clemson standout Heather Kahl Holmes, who played for two seasons under Jolene Jordan Hoover. Holmes still ranks in the top five in Clemson history in assists and assists per set.

Duke enters with two losses as well, with both coming to nationally ranked opponents Colorado State and Minnesota. The Blue Devils were the tied as the preseason ACC favorite by the league’s coaches, and a Clemson win would be a strong statement to the rest of the league.

Hoover has the young Tigers off to a solid start. Clemson features eight sophomores, five freshmen, a junior and a senior. The freshmen and sophomores have accounted for 100% of the team’s kills and blocks, and 98.7% of the team’s overall points.

Defense has been Clemson’s staple so far, as the Tigers rank fourth in the nation in blocking at 3.02 per set as a team. Additionally, the Tigers rank second in the ACC in opponent hitting percentage, holding opponents to a .135 average through 12 matches.

The Tigers got off to a 1-0 start in conference last weekend as they claimed the Clemson Classic opener over Georgia Tech in five sets. Clemson went on to win matches over Georgia State and Florida A&M to claim the tournament title, the team’s third of the season.

Sophomore Lacy Hayes were each named to the all-tournament team. Additionally, Mo Simmons was named the ACC’s Freshman of the Week for her outstanding play.

This will be Clemson’s final home weekend until Oct. 15 and 16, when the Tigers take on NC State and UNC.