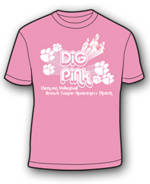 The Clemson Volleyball Team is doing its part in the battle against breast cancer by hosting a Dig Pink match for the fourth straight season. The Dig Pink match is presented by the Print House of Pendleton and will be held on Saturday, Oct. 24, when Clemson takes on Wake Forest at 6:00 PM in Jervey Gym.

“We have enjoyed being involved in the Dig Pink event for the past several years by trying to help in some small way to spotlight breast cancer awareness,” said head coach Jolene Jordan Hoover. “This is a great cause to contribute to and I would like to encourage our fans to please make a pledge during the month of October and to come out and support our team in our match on Oct. 24.”

Fans have several options to participate in this year’s event. Dig Pink T-Shirts will be sold at all home volleyball matches for ten dollars, with all proceeds from the sales of the t-shirts going to the Side-Out Foundation. Fans can also make a pledge per dig or a flat donation. Donations can also be made online. All funds raised will be donated to the Side-Out Foundation.

Breast cancer survivor, Diana Ivankovic, will speak at intermission. Fans that attend the match and wear pink have the chance to win an iPod shuffle.

The Clemson Athletic Department would like to thank the Print House, Zeta Tau Alpha, and the School of Nursing for their contributions.