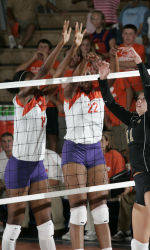 Clemson Volleyball To Face Miami and Florida State On The Road

CLEMSON, SC – The Clemson volleyball team (7-3, 2-0 ACC) will travel to the State of Florida this weekend for matches against the Miami Hurricanes (6-4, 1-1 ACC) and Florida State Seminoles (3-7, 1-1 ACC). The Tigers have won four of their last five contests, including the last two over ACC foes Wake Forest and Duke. Clemson will meet the Hurricanes on Friday, Sept. 30 for a 7:00 PM match in Coral Gables before facing Florida State on Sunday, Oct. 2 at 1:00 PM in Tallahassee.

Blocking has proven to be Clemson’s forte this season, as the Tigers have posted 99 total team blocks, 39 more than their opponents. They have recorded double figures in the statistical category on five occasions this season, including a season-high 17 against Wake Forest on Sept. 22. Danielle Hepburn, a native of Miami, leads the Tigers with 44 total blocks and Laura Boozer has 33. Boozer is also hitting a team-high .378, while freshman Jeannette Abbott, the reigning ACC Player of the Week, continues to lead the Tigers with 158 kills. Fellow outside hitter Brittany Ross has contributed 134 kills for Clemson, and setter Courtney Lawrence has accumulated 377 set assists for the year. Defensively, libero Anna Vallinch has tallied 167 digs for the Tigers.

Friday’s match between Clemson and Miami will be just the fourth meeting between the two school, and it will be the first time the Tigers have faced the Hurricanes in Coral Gables. The Tigers won last year’s contest by a score of 3-0 in Clemson, SC and hold a 2-1 overall advantage.

The Miami Hurricanes won their first five matches of the 2005 season but have since dropped four of the last five for a 6-4 overall record entering this weekend. The Hurricanes split their opening weekend in ACC play, as they defeated Boston College, 3-0, but fell to undefeated Maryland, 3-1. Senior outside hitter Karla Johnson leads Miami with 203 kills and 13 solo blocks. Her 5.34 kills per game mark ranks number one in the ACC. Setter Jill Robinson has tallied 447 assists for the Hurricanes, while libero Ann Gallo has a team-high 154 defensive saves. Miami is led at the net by red-shirt sophomore Ciara Michel, who has posted 40 total blocks.

Florida State leads the all-time series score over Clemson, 20-13, and claimed the last meeting between the two schools with a 3-2 victory on Oct. 30, 2004 at Jervey Gym. The Seminoles also hold an 11-4 advantage in contests played on their home court. The Tigers last won a match in Tallahasse during the 2002 season when they defeated Florida State by a score of 3-1.

Florida State enters the second weekend of conference action with a 3-7 overall record and a 1-1 mark against ACC opponents. However, two of the Seminoles’ losses have come to teams ranked in the top six nationally and they also suffered a loss to #24 Kansas State. Last weekend, Florida State fell to Maryland but rebounded to defeat Boston College. The Seminoles will face Georgia Tech at home on Friday before the Tigers come to visit. Kristen Rust leads Florida State with 122 kills and also has a team-high 12 service aces. Setter Jessica Skower has tallied 334 assists while libero Summer Weissing has posted 151 defensive saves.

Fans may follow the action for both matches on the Internet via the Gametracker link on www.clemsontigers.com. A radio broadcast of the Florida State match will also be available by accessing the following website, http://seminoles.collegesports.com/multimedia/volleyball2005.html.