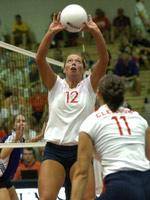 CLEMSON, SC – The Clemson volleyball team will travel to Conway, SC, Sept. 12-13 to compete in the Coastal Carolina Tournament. The Tigers will play Coastal Carolina on Friday at 7:00 p.m., and on Saturday, Clemson will face Florida Atlantic at 10:00 a.m. and Wofford at 2:00 p.m.

The Tigers enter this weekend’s tournament with a 3-5 overall record, after defeating in-state rival South Carolina 3-1 on Wednesday. Lori Ashton leads Clemson with 111 kills, a 3.58 kills per game average and a .295 hitting percentage. The middle hitter leads the team in blocks with 42 (11 solo) and a 1.35 blocks per game average. Leslie Finn has recorded 99 kills with 83 digs, while Liz Beckham has 79 kills and 88 digs. Ryane Beasley has posted 77 kills with 34 blocks and a 1.10 blocks per game average. Lindsey Abbott has a team-best 119 digs with a 3.84 digs per game average. Carly Hill has served up seven service aces, and Stephanie Haskell has handed out a team-high 233 assists.

Coastal Carolina is 3-3 entering this weekend’s contest with wins over Alabama, Tennessee State and Savannah State. The Chanticleers are led by Katherine Jensen with 66 kills and a 3.14 kills per game average. Laura Obert has a team-best .209 hitting percentage with seven service aces and a team-high 14 blocks (four solo). Kristin Rinne has 77 digs with a 3.50 digs per game average, and Jennifer Hampton has recorded 163 assists. Clemson boasts an 8-0 all-time record against Coastal Carolina. The last time the two teams met was in 2002, as the Tigers defeated the Chanticleers 3-1 at the Clemson Invitational. Clemson has a 41-14 all-time mark against teams from the Big South.

Florida Atlantic enters the weekend with a 1-6 overall record, having lost to Florida International 3-0 on Wednesday. The Owls posted a 3-0 win over the Citadel on Sept. 6. Iana Andonova has a team-best 71 kills with a .222 hitting percentage and 14 blocks. Abby Miner has recorded 67 kills and a team-best 68 digs, while Cayse Kaveny has added 54 kills with 12 blocks. Lauren McHugh has served up nine service aces, and Jeana Boyle has recorded 230 assists with a 9.58 assists per game average. This will be the first meeting between Clemson and Florida Atlantic. The Tigers own a 31-5 all-time record against teams from the Atlantic Sun Conference.

Wofford enters this weekend’s tournament with a 3-1 record, with wins over Mercer, UNC Wilmington and Savannah State. Andrea Duke leads the Terriers with 91 kills and a 6.07 kills per game average. Katie Laser has 27 kills with a team-best eight blocks, while Megan Propst has 24 kills and a .217 hitting percentage. Shana Glenn has posted eight service aces, and Rhea deJesus has recorded 178 assists with an 11.87 assists per game average. Clemson and Wofford’s last meeting was in 2002, as the Tigers downed the Terriers 3-0 in Jervey Gym. Clemson owns an 86-25 all-time record against teams from the Southern Conference.