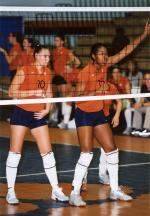 Clemson Volleyball Team To Travel To Maryland And Virginia This Weekend

CLEMSON, SC – The Clemson volleyball team will travel to Maryland and Virginia this weekend. The Tigers will take on Maryland Friday at 7:00 p.m. and then play Virginia on Saturday at 5:00 p.m.

The Tigers enter this weekend with a 14-12 record on the season and a 3-7 mark in ACC play, after splitting last weekend’s matches. Clemson swept NC State on Friday night, but fell to North Carolina in a five game heartbreaker on Saturday.

Maryland is 20-4 overall and 9-1 in conference play after defeating Wake Forest and Duke last week. Lynnsy Jones leads the Terrapins with 307 kills and a 3.65 kills per game average. Maria DiLivio has 270 kills with 274 digs, while Stephanie Smith has recorded 250 kills with a .377 hitting percentage and 106 blocks (19 solo). Rachel Wagener is the team’s top blocker and ranks third in the nation with 153 blocks (15 solo) and a 1.76 blocks per game average. Sarah Treadwell has tallied a team-high 282 digs and Aimee Huddleston has handed out 1,088 assists with a 12.51 assists per game average and 101 blocks (five solo). The all-time series between the Tigers and Terrapins stands even at 23-23. Clemson holds a 10-9 edge over Maryland on the Terrapin’s home court.

Virginia enters this weekend with a 20-6 record on the season and a 4-6 mark in ACC play after splitting last week’s matches. The Cavaliers defeated Duke last week, but fell to Wake Forest over the weekend. Virginia is led by Paige Davis with 348 kills and a 3.91 kills per game average. Alexis Geocaris has posted 226 kills with a .325 hitting percentage, while Lindsey Osco has tallied 210 kills and is second on the team with 266 digs. Geocaris leads the Cavaliers at the net with 112 blocks (21 solo) and a 1.26 blocks per game average. Whitney Ashcraft has recorded a team-best 454 digs with a 5.10 digs per game average to rank nationally, and Kristin Chaney has added 190 digs with 140 kills. Emily Kirkwood has 704 assists on the season with a team-best 26 service aces, while Kathleen Branagh has tallied 431 assists with 104 digs. Clemson boasts a 29-8 all-time record against Virginia with a 10-5 mark in Charlottesville. Under head coach Jolene Jordan Hoover, the Tigers have tallied a 17-3 record.