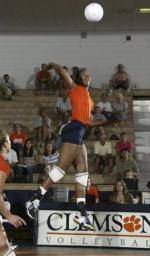 CLEMSON, S.C. – The Clemson volleyball team will play host to Applachian State on Tuesday night. The match is set to begin at 7:00 PM at Jervey Gym. The Tigers hold an 8-1 lead in the all-time series with the Mountaineers, including a perfect 6-0 mark in matches at home. The teams most recently met in the 2001 Big Orange Bash, a match which Clemson won 3-0.

Clemson enters Tuesday’s match with a 12-11 overall mark and a 10-5 record against non-conference opponents. The Tigers won eight consecutive non-conference matches prior to entering ACC play, and hold a 3-1 record against teams from the Southern Conference this season, with wins over East Tennessee State, Furman and Wofford. All-time, the Tigers are 89-25 against Southern Conference opponents.

Appalachian State has an 8-13 overall record, and a 2-10 mark against non-conference opponents in 2003. The Mountaineers are led by Katherine Dean’s 234 kills and .295 hitting percentage. She also ranks second on the team in service aces (24) and kills per game with a 3.16 average. Kali Rumberger has added 202 kills with a 3.37 kills per game average and a team-high 204 digs (3.40 digs per game). Amber Mangrum has tallied 849 assists with an 11.47 assists per game average and also leads the team in service aces with 27. Jackie Jennings leads the team at the net with 76 blocks (11 solo) and a 1.04 blocks per game average.

Admission to all Clemson volleyball matches is free to the public.